Did you know that there is a thing called lake-effect turbulence? I never knew this until I was flying from Chicago-O'Hare to Buffalo last June. I was on my way home from a month-long stay in Manila, since I needed to go there to conduct my experiments. And the Chicago-Buffalo flight was my last leg in my trip.

Anyway, speaking of turbulence, today is a very windy day. I feel myself being carried away by the wind whenever I am outside the house. And this wind triggers the leaves to fall as well. My neighborhood is so orange and yellow, with all the dead leaves lying around. Good thing there isn't any tree in my backyard, or else I'd have to clean them up and bag them for a bit.

I noticed that my posts for this year already exceeded the number of posts I had for the first year I was blogging. Nice! Although, I have to say, that I started this blog around July, thus, if one looks at the frequency, it seems that I still blogged more often back then than now. 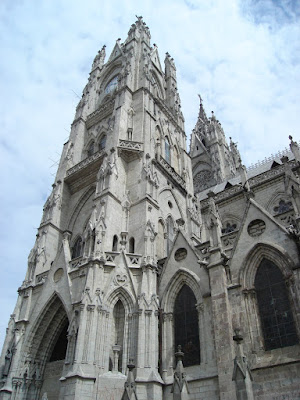 (The clock tower from outside, from my Basilica de Voto Nacional Series)