Given my past, I have had several chances to learn a language. And looking back at all those chances, I realized that each one of those learning processes were different.

First was learning my first language. I guess all I did was observe my parents talk, store my observations, and process them. Perhaps I made grammatical mistakes whenever there is an irregular form of a certain word that I did not know and mistakenly applied a rule that wasn't supposed to be applied. But, I did not make a deliberate effort to learn my first language, which was Tagalog.

My second language is English. I also do not remember having a deliberate effort of learning this. Whenever people ask me where I learned my English, I would answer that I learned it through Sesame Street. I did remember reading children's books in English, but I never sat down in a class and deliberately learn it.

The third language I learned was Japanese. This was different. I first took a six-month-long class of introductory Japanese. It taught me basic phrases and constructions. After that, I was forced to learn the language by being enrolled in the Japanese school system, thereby it was a form of total immersion. I guess I had some sort of shock in the process. Since, this way, some of my other aspects of learning were hampered, such as my academic progress. Anyway, it paid off in the long run, since I became fluent with the language. However, since it has been seven years since I left Japan, a lot of the characters are slowly fading away (since my brain has been replacing its memory with more accessed and more used bits of information) and my vocabulary is slowly getting depleted, as evidenced by my occasional conversations with Japanese speakers, where I have to revert back to English sometimes when I am at a loss of words.

The fourth language I learned was German. This was something that never got too far. I took 24 credit hours of German in undergraduate. However, due to the fact that I never got immersed into a situation where I had to use the language, I never improved to a conversational level.

Aside from that, there are also a couple of languages that I had brushed with in the past. Before my trip to Prague in 2006, I picked up a Czech phrasebook, and it proved useful whenever I took long-distance country trips in the Czech countryside. I also did the same before traveling to Quito, Ecuador, when I picked a Latin American Spanish phrasebook.

There are plenty of things that spark the interest of the scientist in cases like me. Since I know more than one language, how are the words stored? Do I have parallel lexicons? Or do I have a inter-related and linked lexicon? These are some of the questions that the psycholinguist wants to answer. But that is the work for someone else, not me. 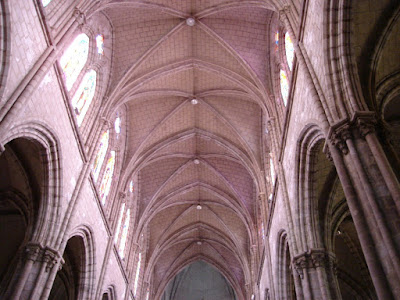 (The intricate roof, from my Basilica de Voto Nacional Series)