Yesterday was a weird night. I was very tired, and so I grabbed my book and read myself to sleep. I guess it was around 9:30 PM when I decided that I can't process any information any more, so I got up and turned the light off. I was so zonked.

But around midnight, I woke up. I thought I was dreaming. There were lights all over. Blinking lights, and sounds kabooming here and there. I checked the kitchen and the whole house was dark. I checked my roommate's room and it was already dark. But apparently, there was a lightning storm. And the sounds were so loud.

I went to the kitchen and drank water. Thunder was kabooming still, and I heard noises outside. I decided to dive back to bed. And I was out in a moment.

Anyway, apparently, last night was a rather loud lightning storm, and people were talking about their experiences last night. 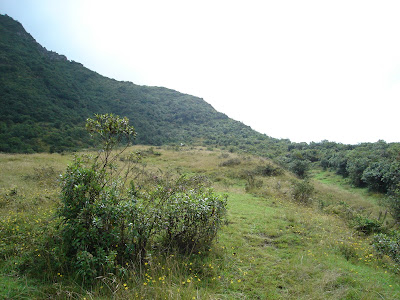 (On the way to the crater, from my Vulcan Pululahua Series)