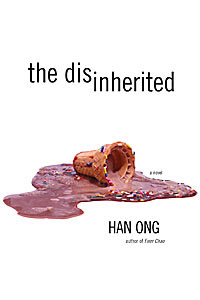 The weather has taken a turn for the worse. Well, not exactly bad as it seems; this is my third time to experience a Buffalo winter, so by now, it is nothing. But today, the temperature started to dip down to the single digits (Celsius, of course). So I know it is coming.

Yesterday was a bizarrely weird day. A friend of mine and I wanted to watch a play, and we got tickets for yesterday night at 8:00 PM. So before that, we agreed to go out to dinner, and so we did that. I haven't been to the Thai restaurant that I went a few months ago recently, so we decided to go there, since my friend hasn't tried Thai food before.

After dinner, we went to campus, and so we were in time for the play. The play was The Shape of Things by Neil LaBute. I was quite impressed with the way they produced it. They used the Black Box Theatre in the Center for the Arts building here in campus. This theatre is flexible in nature, and they made it that the stage is actually in the middle of the audience. The audience can opt to either sit on the floors in between the four different podiums, thereby creating the effect that they are part of the spectacle, or the audience can sit on the balconies around the stage, thus as if they are peeping into the lives of the four characters in the play.

I loved the play because it addresses multiple issues that I think are worth addressing. It is about a graduate student, who is a sculptor, who dates a guy, who until that point, was the totally uninteresting guy on the planet. And as they get to know each other more, the guy changes bit by bit, from his hairstyle, to his clothes, up to the point of getting a noselift, just for the female sculptor. In the end, the guy proposes to the girl. But what the guy doesn't know is that he is the sculpture of the girl, and the girl has no love interest in him whatsoever. For the girl, he is just a piece of art, where she has used the human flesh and the human will as base material.

The play addresses the question, What is art? What qualifies something to be called art? Can one call the end product of this specific task as art? The play also addressed the power of manipulation. Many people have partners, but none of them are perfect. Most of the time, there is just one thing that we want to change in our partners. Do we do it abruptly, or do we manipulate them subtly?

In short, yesterday was a rather very enjoyable night. Good thing I went with somebody, or else I would have to endure the bus ride late at night, which I didn't want to, since the goblins and the zombies of Buffalo are all unleashed in their costumed fury. I even saw a guy with a weird hat wielding an ax; I think his costume was a Viking.

Anyway, aside from that, I also finished reading my other book about a family, whose father was imprisoned in Iran, simply because he was a Jew. It was a very moving book, and I definitely recommend it to people. Thus, I returned the book to the library, and I started on a novel called The Disinherited, by Filipino-American novelist Han Ong. I haven't gotten much yet, so far I am in the first chapter, and it starts with a funeral procession in the middle of EDSA. Interesting so far.

There you go, my blog post for today. I'll see you all soon. 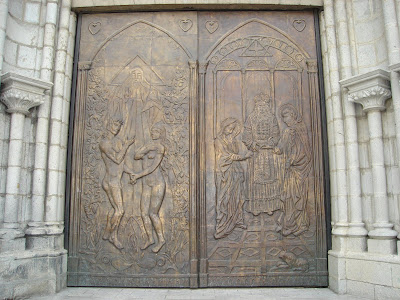 (The intricate doors of the basilica, from my Basilica de Voto Nacional Series)