Yesterday I spent the whole afternoon after class reading over the grant proposals that I was to review over the next week or two. Some were good, some were ok, a few were bad. Basically, this is a research fund that is run by graduate students. I have served in the Review Committee before, and I am doing it again this semester. I figured that it would be a good way to gain experience in these sort of things, since after all, a few years later, I surely would expect to find myself in a situation where I need to be consulted with regard to money matters.

Since this is run by graduate students, who are we to evaluate which proposal is good or bad since we aren’t experts in all of these fields? Any graduate student with a project in mind can apply, so one can imagine the diversity of the types of projects that we get.

So, because of that, the only way we can evaluate which one to fund and which one to reject is depending on whether they followed the instructions carefully or not. Whether they have good grammar or not. Whether they exceeded the amount of words that are allotted in the abstract or not. If they followed the directions well, then usually they get the full amount that they requested for. If there are a few bad things, then they are penalized by partial funding, or sometimes they are not funded at all.

Aside from the reason I wrote above, another reason why I do this is because I am interested at the diverse types of research that is being done in this university. People go to places to conduct fieldwork, ranging from places such as Lahore, Pakistan to Ulan Bator, Mongolia. People also do plenty of different things in the laboratory, such as cloning cells and doing electrophysical experiments in the molecular level.

Another reason why I volunteer in the Review Committee is because I know that some time along the road, I will need to apply for funding as well, and so by knowing the rules of the game from an insider point of view, it would be an easier exercise for me when I do it in a few semesters.

So because of that, I have read twenty-something proposals yesterday and wrote comments on them.

By way of a change of topic, my roommate is sort of entertaining me. He apparently discovered a Filipino store in the neighborhood. He has some friends that have wheels, so they go there during the weekends. And the other day, he bought stuff such as red eggs (duck eggs that are processed in a way that they are saltier than the usual egg), shrimp paste, soy sauce (yes, there is soy sauce available in the supermarket, but he doesn’t like Kikkoman, which is the typical brand, because it is not “dark” enough), fish sauce, sausage (this is longganisa, the typical Filipino sausage, not the ones you usually find here), and different kinds of fish for frying.

For me, he is an exercise in amazement. I never fail to be amazed by him, at how ingrained in his system the typical Filipino ways are. I am not saying that if it is the case, it is bad. All I am saying is that there are plenty of other stuff around the world to try, but he is very reluctant in doing so.

It makes me think of some of the people here in Buffalo. I have met people who spent all their lives here in the area. They never moved, they never traveled. They never saw what is outside Erie County. It kind of reminds me again of Plato’s Allegory of the Cave, where people never left their surroundings and never saw what was outside. 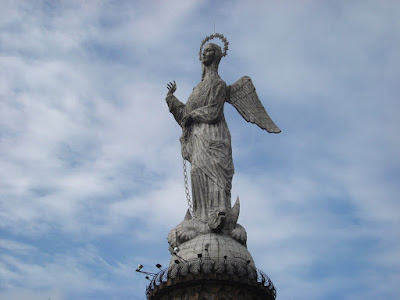 (Another angle of the virgin, from my La Virgen de Quito Series)