I can't remember how I ended up there. But there I was, walking the shopping streets parallel to Route 43, running between Sannomiya and Motomachi. We just got out of the okonomiyaki shop, the taste of the fresh oysters fried together with cabbage and eggs still lingering in my mouth. I can still smell the hot plate, with mounds of okonomiyaki batter sizzling on top of it, and the sounds of laughter of me and my friends, talking in the small room.

Then, I suddenly found myself outside the shop, walking westward, heading towards Motomachi. I can't remember where my friends went. I checked my hands, and little did I know that I was clutching a bottle of Stella Artois on my left, and a Kirin on my right. All I cared about was that they were there, safe within my grasp. I took a sip from both of them. Nice and cool, soothing to the throat.

I continued walking, but I couldn't walk straight. I veered to the right, only to be bumped back to the left. I saw the Maruzen bookstore on my left. I remember this place. I used to sneak out of the music school and spend a few minutes here before my piano lessons reading English books, canvassing the place, and seeing which book I would want to ask my parents to buy for me.

I went inside the door, and put the two bottles on a stall to my right, covering them with a book. Andy Warhol's photographs. I burped, loud enough for a shrine's gongs to reverberate. Two Japanese ladies looked my way, murmured something, and continued on their business. I strolled in between the shelves, and looked for something to catch my attention. I reached my hand forward, and grabbed a colorful book. 101 Cocktails.

Eventually, the ceiling started to whirl, and I felt the building would collapse, so I headed to the door, grabbing my two bottles along the way, before the building crashed on to my head.

I was back on the street again. My Stella Artois was empty, so I grabbed the arm of a stranger, he was a high school kid, complete with the Mao Zedong uniform and all, and I told him, Totte yo! Mo iranai kara! "Take it! I don't need it anymore!"

He was speechless, and took my bottle.

And less than 5 seconds later, another stranger, a middle-aged woman, with a Daimaru department store paper bag on her arm, reached inside her paper bag, and gave me another bottle. Arigato. "Thank you," I told her.

I continued on, and entered the Yamaha Music School, near Motomachi. I saw a grand piano, and a man on a tuxedo, playing. On top of the piano sat Marilyn Monroe, or a look-a-like. I couldn't tell. I saw a baritone saxophone hanging by the wall, and I poured the remaining contents of my Kirin into it. It was lukewarm by now, not palatable at all. Suddenly, Marilyn Monroe took the baritone saxophone and played it, facing the pianist. All the lukewarm liquid thus flowed out of the saxophone, and directly to the face of the pianist, who seemed to be laughing and smiling at the same time, as if he was being rewarded, like an obedient dog.

Ah, people in this shop aren't making any sense, I thought. So I got out, but before I got out, the cashier in the music store asked me whether I would like to redeem my coupon, which I totally forgot. Why not, I told him. So he went inside the office, and reached inside a large white box, which I discerned to be a refrigerator. When he got back to me, he handed me another bottle of Kirin. Needless to say, I thanked him.

My head, it's throbbing real hard. It felt like it was being inhabited by a circus monkey who was beating a drum constantly inside. And all I could do is take a sip from either of the two bottles I was clutching, hoping it would drown the monkey in my head. I went to a clothing store, and went up the second floor. There was a couch there, I knew it; ten years ago I used to sit on that couch while waiting for the dressers to fit my mother with her latest outfit. I moved the couch so it was facing the street and not the inside of the store. I people-watched for a few minutes, taking copious sips of the drinks I had in the meantime.

Then, I grew tired of it. So I lifted my butt off the couch, and headed westward again. I saw the hole, where people were descending. The entrance to the metro station. I took one step, and suddenly, the concrete steps turned into a moving escalator. Were they escalators in the first place, and I simply didn't recognize it? Or was this the new model of an escalator, camouflaged as a simple staircase. In any case, I couldn't tell.

I cannot remember how deep the station was, but I think I was standing there for at least 15 minutes. I knew it was 15 minutes because I heard Ravel's Bolero play from start to finish, and I know that that piece takes 15 minutes to perform. But, there I was, at the bottom, and I turned left, seeing a window. It was strangely bizarre to find a window, at the bottom of the underground escalator. I approached the window, and was surprised to find my hands free of their occupants. I peeked at the window, and upon doing so, I saw the sunrise, welcoming the new day. 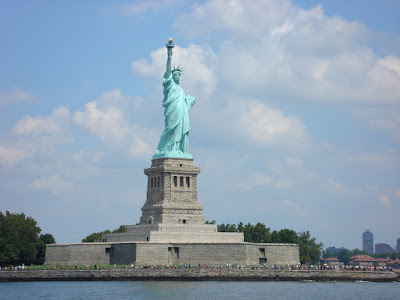 (Encircling the lady, from my Statue of Liberty Series)