Close Encounters with the Turkish Kind

Yesterday night, as I was waiting in the bus stop for my bus ride home, I overheard two people talking in a language I couldn't understand. I knew that I would be asking them what language it was one way or the other, but I decided to play it by ear first, and see whether I could deduce what language it is.

So, no clicks. Therefore, it is not a Khoisan language. The two people were fair skinned, so I don't think it is a Bantu language either. No tones, so that eliminates Niger-Congo, Nilo-Saharan, Sino-Tibetan, and Austro-Asiatic, along with other Southeast Asian languages. Besides, the two people didn't look Asian anyway.

The language glides smoothly, from one syllable to the other. It reminded me of French, in the way I couldn't draw the boundary between words whenever I hear people speak it. But it isn't French, since I don't hear any nasalized vowels. No alveopalatal fricatives either. Could it be Italian? No, it doesn't have the distinct intonation. My best guess was that it was a Romance language, probably Romanian. Because it wasn't Portuguese either, since I couldn't hear any palatalization in alveolar phonemes. I wouldn't say Occitan or Catalan, because I should find cognates in Spanish and Italian when I am not finding one. So my best bet was Romanian.

It turned out that I was 284 miles off. The girl had her bookbag open, and so I grabbed this opportunity to budge in and tell her that her bookbag was wide open. And then I asked them what language they were speaking.

It turned out to be Turkish. I didn't realize that Turkish could be so beautiful in the ears. Then again, I have to be objective and put on my linguist hat, and say that it couldn't be the case that there are languages such as French and Italian that sound "romantic" compared to other languages like Chinese and Arabic.

After all, everyone can express their love in whatever language available. 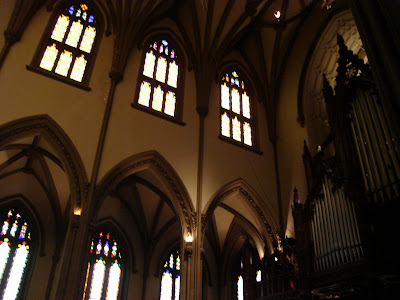 (The delicate brown colors dominate the church, from my Trinity Church Series)