So, I have survived this semester's Hell Week. Let me recount.

Last Tuesday, I took my first Advanced Statistics exam. I scored a 31 out of 35. Only four people from a class of 50 scored higher than me. I met with the professor and discussed my wrong answers, and I found out that if only I read the questions more carefully, then I would have increased my score, possibly, scoring a perfect exam. It is a bad feeling, when one is careless. Anyway, at this point, I still have a huge chance of getting an A in that class and maintaining my nice GPA.

Yesterday, I gave my first colloquium talk in the department. I presented my Qualifying Paper research to the whole faculty for the very first time. So for the very first time, everyone has an idea about what my research is about. I had a rather smooth delivery, and the questions that were given were answered in a succinct manner.

Except for one instance. This is the only sour note in the whole week. After the colloquium, when everyone returned to their offices, including me, I was arranging my stuff and getting ready to leave, when another graduate student came into the room. A good friend of mine was just getting out, after he complimented me with my talk, saying how he liked it. Then, this other guy came in, and said that he still does not agree with my claim. Fine, that's not a problem. However, I told him that I have the data to back my claim, even re-explaining what my table of numbers were about.

Still, all he could manage to say after that was "I don't know about that." After that, he was still insisting that a certain concept is not to be overlooked, and this might change my conclusions. However, the interesting thing though is that my research is not covering this other certain concept. The point that he is raising may be a good one, but an irrelevant one. I told him that, ending with the phrase, "Oh well."

That's when he told me that he was offended by my behavior. He was offended by the fact that I should be willing to accept feedback but I apparently am not welcoming his feedback. Immediately I told him that I might be blunt into saying that what he was saying was irrelevant, but I never meant to offend him. If I did, then I am sorry. I apologized. I don't know if he accepted it or not.

I guess, one cannot make everyone happy. I should have known that by now. My role is not to please everyone, but to do research. I'd do research, and to the best of my abilities, I will come up with a good answer to anyone who challenges my story. If I cannot answer the questions, then I will change and improve my story, but as long as my current story holds, then I will defend it.

That was a minor sour note, but all in all, the week was hectic and productive. I decided to top it off by watching a musical produced again by the wonderful Theater and Dance Department of the university. Of course, there was another reward I secured for myself, but that won't be a topic of a blog entry for the time being. The department was producing the musical City of Angels this week, and I secured tickets for yesterday night's show. I watched it with two of my friends. It was amazingly awesome. I like the complicated plot, and the fact that the story has a film noir style. Too bad it closed in Broadway more than a decade ago. 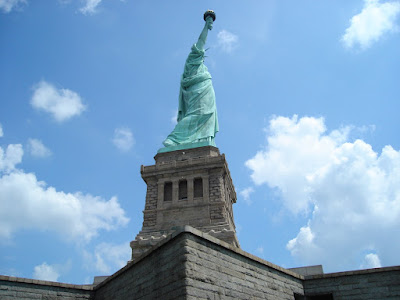 (Close-up of the platform, from my Statue of Liberty Series)