Last Sunday was the premiere of my favorite show, none other than The Amazing Race. They are back for the twelfth season, and again, they are racing around the world. As the multitudes of seasons passed by, the show has been through many different incarnations, from different rules, to different penalties, to different team formats. Good thing that they are back to the two people per team format. I really hated the Family Edition.

Anyway, I still am puzzled as to why they accept certain people in the race to be participants. I know that this is open to all, and that equal opportunity is a good thing, but it is a race after all, so people that are not so physically fit will most likely trail behind.

I wish there was a season where everyone is just able-bodied men and women. Not teams that consist of grandfather and grandsons, or fathers and daughters where the elder person is a senior citizen, or obese teammates.

I remember a previous season, then they went to Milan for the first leg, and they were bussed to a ski resort somewhere in the Italian Alps, and they had to cross a tight wire bridge in between mountaintops, a woman, who was rather plump, couldn't even make it smoothly, and she had to stall all the players.

I know, people use the race to prove something to the world. But is it really necessary to prove it to the world that you can or cannot do it? It is a race, it is an adventure that spans 30,000 something miles. Plus, why do I care whether two lesbian ordained ministers are able to finish the race or not? Do I care whether two siblings who are also engineers are able to finish the race? Why do they need to prove that they are strong in brawn not only in brains? And why does a Goth couple need to prove that they too can run the race?

One more thing that sort of annoys me is the drama (or something like it) that accompanies the race participants. This is a race, not a soap opera. I do not need to know that a father wants to make up lost time with his daughter while running the race. That isn't going to happen. People will be concentrating on filling that basket with peat and transporting it using a donkey. People will be concentrating on pedaling that bicycle across a high wire on top of the Atlantic Ocean. The race is no quality time, if there exists such a concept.

Aside from the participants, there are other things that annoy me as well, like showing wrong footage of aircraft in the show. One example is when the teams that transited from London Heathrow Airport supposedly "arrived" at Shannon Airport in Ireland, they showed a British Airways Boeing 747 (the "jumbojet") taxiing the tarmac. However, what actually took place was that the teams connected in London Heathrow with an Aer Lingus Airbus A320 plane, a smaller plane that the jumbojet. British Airways doesn't even fly the London-Shannon route, only Aer Lingus does. But then, that may just be me, the aviation fanatic.

That's why sometimes I pity the racers. They are too rushed they don't even have the time to snap a photograph. Their passports may have all the entry stamps and visas, but could they really say that they have experienced the country?

I don't think so. 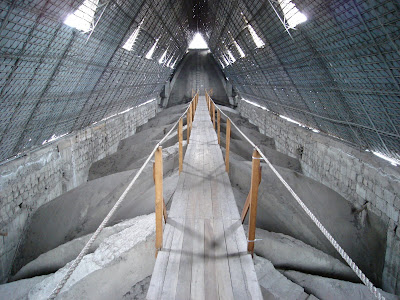 (The dangerous steps to the clock tower, from my Basilica de Voto Nacional Series)