Laughter is the Best Medicine, Blonde-Style

I figured I'd go light today, by putting on some laughter here for a change. And for today, the theme is: blonde jokes! I got these from the web, and it made me laugh, hopefully, it will make you laugh too.

A young blonde was on vacation in the depths of Louisiana. She wanted a pair of genuine alligator shoes in the worst way, but was very reluctant to pay the high prices the local vendors were asking.

After becoming very frustrated, the blonde shouted, "Maybe I'll just go out and catch my own alligator so I can get a pair of shoes at a reasonable price!"

The shopkeeper said, "By all means, be my guest. Maybe you'll catch yourself a big one!"

Determined, the blonde turned and headed for the swamps, set on catching herself an alligator.

Later in the day, the shopkeeper was driving home when he spotted the young woman standing waist deep in the water, shotgun in hand. Just then, he saw a huge 9 foot alligator swimming quickly toward her. She took aim, killed the creature and with a great deal of effort hauled it on to the swamp bank. Laying nearby were several more of the dead creatures.

The shopkeeper watched in amazement. Just then the blonde flipped the alligator on its back and, frustrated, shouts out, "Damn it, this one isn't wearing any shoes either!"

A blonde made several attempts to sell her old car. She was having a lot of problems finding a buyer, because the car had 340,000 miles on it. She discussed her problem with one of her friends.

Her friend suggested, "There may be a way of selling that car, but it's not going to be legal."

"That doesn't matter at all," replied the blonde. "All that matters it that I am able to sell this car."

"Right," replied her friend, "here is the address of a friend of mine. He owns a car repair shop around here. Tell him I sent you, and he will turn the counter back on your car to 40,000 miles. Then it shouldn't be a problem to sell your car."

The following weekend, the blonde took a trip to the mechanic on her friend's advice.

About one month after that, her friend saw the blonde and asked, "Did you sell your car?"

A policeman interrogates three blondes who are training to become detectives. To test their skills in recognizing a suspect, he shows the first blonde a picture for five seconds and then hides it. "This is your suspect, how would you recognize him?"

The first blonde answers, "That's easy, we'll catch him fast because he only has one eye!"

The policeman says, "Well, uh, thats because the picture shows his profile."

Slightly flustered by this ridiculous response, he flashes the picture for five seconds at the second blonde and asks her, "This is your suspect, how would you recognize him?"

The second blonde giggles, flips her hair and says, "Ha! He'd be too easy to catch because he only has one ear!"

The policeman angrily responds, "What's the matter with you two?! Of course only one eye and one ear are showing because it's a picture of his profile! Is that the best answer you can come up with?"

Extremely frustrated at this point, he shows the picture to the third blonde and in a very testy voice asks, "This is your suspect, how would you recognize him?" He quickly adds, "Think hard before giving me a stupid answer."

The blonde looks at the picture intently for a moment and says, "Hmm - the suspect wears contact lenses."

The policeman is surprised and speechless because he really doesn't know if the suspect wears contacts or not. "Well, that's an interesting answer. Wait here for a few minutes while I check his file."

He leaves the room and goes to his office, checks the suspects file in his computer, and comes back with a beaming smile on his face. "Wow! I cant believe it. It's true! The suspect does in fact wear contact lenses. Good work! How were you able to make such an astute observation?"

"That's easy," the blonde replied. "He can't wear regular glasses because he only has one eye and one ear." 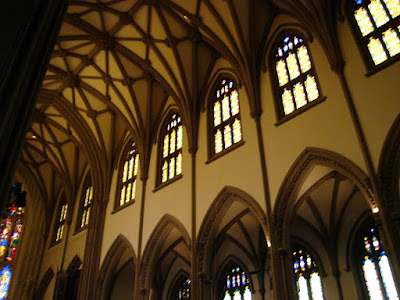 (The intricate wooden ceiling, from my Trinity Church Series)