I just watched the third episode of The Amazing Race 12. It was again, a nice episode, with some annoying bits and pieces.

First of all, why do they show wrong planes? They showed an Aeromexico taking off in the runway when they showed a film clip supposingly describing their flight from Dublin to Amsterdam. Aeromexico does not fly to Dublin!

But that was just a minor point. The major point is, why is it that they get contestants that obviously have a low travel IQ? I remember a few seasons back, when they flew to Beijing and needed to eat fish eyes using chopsticks. Two contestants said that they were from Cleveland, Ohio. So what do they know about chopsticks?

This time, they went to Burkina Faso. They rode the train and commented about the flies, how people bring flies and how bad the smell was, even calling their new perfume and outfit being manufactured by Salon d'Afrique.

I just find those comments annoying. Not everything is as perfect as Wisteria Lane you know. It just shows how culturally insensitive people are sometimes. And it is funny that the ones who said that were two blondes, again emphasizing another stereotype.

The contestants should do research about traveling around the world if they opt to join this race. I understand that one doesn't know where exactly they would be going, but one can at least figure out beforehand that they do not speak Spanish in Burkina Faso, and that one's Gracias! means nothing to a cab driver who is living in a Francophone country. 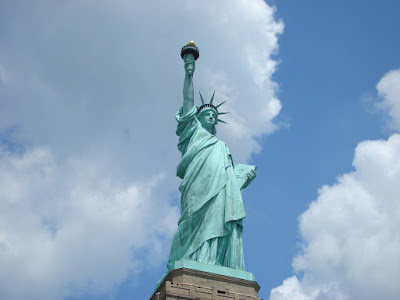 (Facing it, from my Statue of Liberty Series)