These two oppositions are evident in many different ways around us. That is why people have devised different theories to account for these: the two most known being the Central Limit Theorem and the Chaos Theory.

One instance in language where these two oppositions are evident are from the fact that there are sound processes that motivated by the desire to have an ease of articulation. Assimilation happens because human phonological systems want an easier pronunciation. However, if the drive for ease of articulation wins all the time, then all we would do for language is to just open our mouths and release air and say “Ahhhhhh” all the time. Of course, that does not happen since the desire to put meaning into the sounds, in other words, to have order in the sounds, also plays a part, thus, differentiating the sounds to signify different sorts of meaning.

But let me stray away from the topic of language for a bit, and let me discuss my own theories of love. I have mentioned before, if I am not mistaken, that I do believe that the human phenomenon of love and lust can be observed and explained empirically.

First of all, why do we say that a certain person we see on the street is sexy or not?

Sexual orientation aside, if you see a person on the street who is of the same type as you are, then you can judge that person as sexy or not if you think he or she has characteristics that if you had them, you would be sexy. Plenty of people wouldn’t dare say that someone of their own kind is sexy for fear of being branded as a homosexual. But doing so just acknowledges that other person’s possession of a characteristic that you want as well, and should you have it, then you are sexy as well.

Now if you are judging a person that is not your type as sexy, then this is based on your desires. Of course, humans are inherently selfish. Thus, one only wants what one thinks is best for oneself. It is because we have the instinctive desire of survival that we pick what we think is the best person as the object of our desires. Evolutionary psychologists may say that this is the reason why older men pick younger women, because they are the most optimal in bringing up offspring. Younger women on the other hand pick older men because they are the most capable of supporting them in financial and other means. However, what I see in that is simply that men are being selfish, as humans naturally are, and they just choose mates the same way as they choose cars. One wants a newer one, a younger one, a fresher one, a more stable one, a more secure one. One wants the product that he or she can get the most out of.

I do not believe in love at first sight. I believe that love can be developed, and is actually developed. I believe that it is impossible for one to fall in love with a total stranger, the moment one sees the other. Instead, what that is is a manifestation of lust. That is lust at first sight. That is the sighting of a person, who is the epitome of one’s desires. Now if one ends up being with that person, then that just means that they have developed their love, but what they felt at the beginning was just lust.

I believe that love is the result of a person’s willingness to share and open up one’s own person with another. This can be measured in a continuum ranging from 0 to 10. One can say that one’s relationship with another person lies somewhere in this scale. If one’s relationship with another person is a zero, then that means that they share nothing with each other. Both are total strangers with regard to one another. Like the person who shared the elevator ride with you this morning. Or the person who sold you your coffee.

The more the number increases, the more bits and pieces of information you share with this person. Thus, a zero is a stranger, and a ten is the ideal lover.

I do not know whether there are plenty of people who are ideal lovers. Or maybe it is just me being cynical. Perhaps most people claim to be happily in love with another person, but deep inside they have secrets that they don’t want their partners to know. And if it isn’t detrimental, then they would continue their lives without revealing it. But it still shows that one holds back something from their partner, thus, not giving the totality of oneself to the other.

This scale also explains why friendship exists. Friendship is basically the commitment of two individuals with each other. The reason why that bond gets strong is because the two individuals have a common ground, a shared history. They agree to divulge to each other important bits of information that they do not pass to other people. That is what distinguishes a stranger from a friend, they score higher in the continuum.

This implies my next belief: that friends can turn into lovers. Lovers are not in their separate category. In order for a person to be your lover, he or she must be your friend first. And of course, at the first place, he or she was a stranger. What happened was that both of you decided to increase your common ground and construct a shared history. And as the score increases, the more chances there is of your friend becoming your lover. Your lover is after all, your best of all the best friends you could possibly have. Your lover is the product of your desire, because you chose to select a person out of the multitudes of people there are, and cultivate a relationship with this one. This brings me to my other belief, which is about sex and the law of supply and demand.

Now why do we go ahead and find partners for ourselves? It is because there is a demand for one.

Somewhere down the line, as we progress and age, there will be a time when we would have the urge to find a partner. Ideally, this partner should be someone that we love, but sometimes, people find themselves in dire straits that they would be willing to forego the idea of love, as long as they have themselves a partner. No wonder there are cultures around the world that have marriage matchmakers.

Why do people set off finding a mate? Because they feel incomplete without one. Because they feel that something is missing if they don’t. But if one is contented, if one is satisfied, if one feels satisfactory with the current state that one is, then one does not have the desire to get a partner. One will only get one if one’s system tells oneself that it is necessary.

What is the root of all this? Regardless of which aspect of human sexual behavior we look at, we see one principle; the Selfishness Principle. This is the one that drives all of us. You declare someone you are not sexually attracted to as sexy because you envy what he or she has and you think it will make you sexy if you have it. You declare someone you are sexually attracted to as sexy because you think that person is the epitome of your desires and will satisfy it. You pair up with another person and declare that person your lover because you and that other person have a shared history together, and without the other you feel incomplete and vulnerable, thus unable to survive this world. And you find a mate only because there seems to be a void that needs to be filled in your system, and your partner ideally should be the best fit for that void. 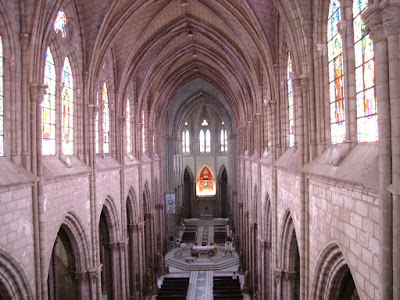 (Looking towards the altar from the balcony, from my Basilica de Voto Nacional Series)