Yesterday, I was working on my qualifying paper until late. I was manipulating my Excel sheets and working on my data set. Sometimes, this task can be boring, since the repetitive movements I do with my hands seem trance-like, automatic, producing numbers in front of my eyes, in the screen.

So, before I get repetitive strain injury such as carpal tunnel syndrome or any other related disorders, I pause sometimes and let my mind wander.

And last night, I found myself checking out AA.com for airline ticket prices.

And guess what? I found a round trip airfare to Delhi, India for just 767.00 USD! Half than the usual fare from my part of the world. This route will require one to fly from Buffalo to Chicago on American Airlines, and from there change airlines to Royal Jordanian Airlines, which has a flight from Chicago to Amman, Jordan. One will then change planes in Amman for another Royal Jordanian flight to Delhi. And the whole trip just costs 767.00 USD! My Indian friend told me today that it is just half compared to what she usually pays.

Ah, the price might be right, but my brain still rules. Not right now, maybe later. Way later. But my Israeli friend wants to go to India as well, so we sort of agreed that both of us will go three years later. In that case, it would be in 2010. And in that case, that trip would be my graduation present to myself. Nice! I can't wait to frolic inside the Laxminarayan Temple and Humayun's Tomb. 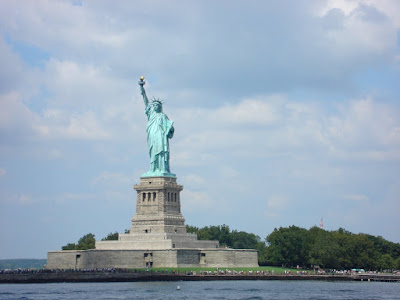 (The lady from another angle, from my Statue of Liberty Series)