The snowstorm is here. It started last night, but wasn't so bad, yet.

I woke up at around 7:00. There was a meeting that I was scheduled to attend (this is every Sunday), and so I woke up and went out, donning my winter outfit, and shoveled the driveway. The snow wasn't that bad yet, perhaps 2 or 3 inches. So it took me thirty minutes to clear the driveway and make a path to the sidewalk. It was not snowing heavily by then, and the snow had a frozen crust to it, so when I shoveled it, it made a cracking sound when I break the surface.

So I made a pile of snow in my backyard, where nobody walks, and also on the next-door neighbor's backyard lawn.

That was Snow Shoveling No. 1.

Then I went ahead and prepared breakfast, as usual. I made tea, fried an egg, and consumed four slices of bread, together with cream cheese and peach preserves.

Then I went to the shower.

When I got out, I check my phone, and I have two messages. Apparently, the meeting is canceled, and so two people called me to notify me. The weather was the culprit.

So I then sat down, and saw my laundry basket, to which I decided to do. So I went down and picked them up, and tossed them in the washer. I also turned the iron on, and went ahead and ironed the other basket that was there.

Then, my laundry was done, and after folding and ironing it, I looked out the window and saw that it was snowing, heavily. My recently shoveled driveway is full of snow again.

So, I decided to cook some rice, and after plugging it in the socket, I donned my winter gear again, and shoveled the driveway once more.

So, I increased my snow pile, and did the whole routine again. Because if I don't do it, then it will just pile up. Then people will just step on it, and it will harden and turn into ice, and people will then slip on it, and accidents may happen because of it.

That was Snow Shoveling No. 2.

I then had lunch after shoveling. And when I checked the window, it was good to see that the snow was getting weaker.

And now, I decided to brave the weather and go to the library, which was about five minutes away by foot. The visibility is ok, it's not snowing that hard, yet, as I was walking here complete with my winter boots and everything, scenes from winter movies flashed before my eyes: The Chronicles of Narnia, The Day After Tomorrow, Alive and Happy Feet. In fact, for a second I thought I saw the abominable snowman.

Or maybe that was just my imagination. After all, almost everything here is white. 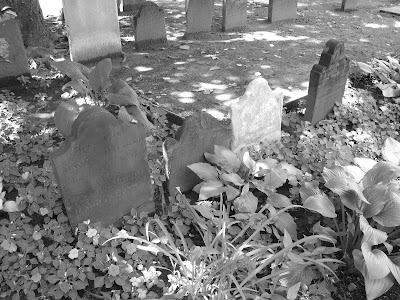 (Resting in peace, from my Trinity Church Series)