The second day of my stay was a Tuesday. Thus, after getting breakfast in Georgetown, I headed off to the Commonwealth of Virginia. I crossed the Potomac River and went to Arlington National Cemetery. Good thing that there is a metro stop for this one, it was easily accessible.

On a side note, I love the way the Washington DC metropolitan area has been planned and designed. Things are accessible even if one doesn’t have personal transportation. It is like New York City, I guess, but the city doesn’t tower over you like New York City does.

Anyway, so I rode the Blue Line and got off at the station near the cemetery. From there, I walked towards the entrance and saw the Women’s Memorial. This memorial has an exhibit area in the inside of the marble palazzo, and it displays the "achievements" of the women in the different battles that the USA has engaged in. It was an okay exhibit, I wasn’t impressed, but then, that was just me, I was more interested in the architecture of the building, rather than the content of the building itself. This is a picture of it. 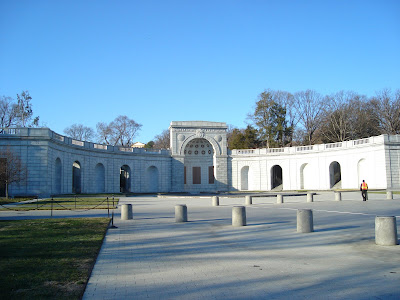 I climbed the top of the building, and then took photographs of the panoramic view that it provides, overlooking the National Mall. The street that connects the cemetery to the National Mall points straight to the Lincoln Memorial, something that I will be heading to later.

Anyway, I decided to go to the outer fringe of the cemetery first, and find the Iwo Jima Memorial. So I walked and traversed the cemetery to its northern edge, and witnessed a funeral happening. I did not take any photos, since I didn’t want to disrespect anybody, but there were people in uniform, forming a line, while the funeral was taking place.

Then, I reached the Iwo Jima Memorial. This is a statue composed of several bronze soldiers trying to plant the US flag on the island of Iwo Jima in Japan. I was wondering why it needed six soldiers to plant a single pole. Is it that heavy? Anyway, I guess it is. In the following picture, I used a different angle, instead of traditionally capturing the subject in simple fashion. 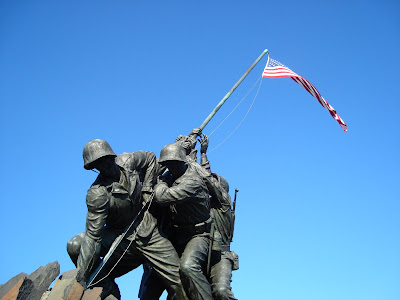 After taking sufficient photos of the memorial, I backtracked and passed the Netherlands Carillion. This was a gift of the people of the Netherlands to the United States. It is a modern-looking carillion, and it rings every hour. It is guarded by two dog-like cats, or cat-like dogs, I couldn’t really tell.

Then I went back to the center of the cemetery. The funeral was still going on. I then headed to the graveyard of William Howard Taft, a former President of the United States, and if I wasn’t mistaken, he also was a former governor of the Philippines when the country was under US rule, back in the early 1900’s. He had a simple grave here in Arlington.

Then I headed to the Arlington House. This is a mansion that sits right in the middle of the cemetery. It used to be that a certain personality named Robert Lee owned the estate. He then went over to the Confederate Army during the US Civil War. The Union soldiers then buried the dead around his house, and after the war, he couldn’t live in his estate anymore, due to the buried dead. So he sold his estate to the government and it became Arlington National Cemetery. But his house is still standing. Too bad that when I visited, the house was being renovated, and the furniture were removed. The only thing remaining there are pictures of what the individual rooms are supposed to look like. So I only took pictures of the outside.

In front of the Arlington House is the graveyard of Pierre L’Enfant. He was the urban planner of Washington DC, designing it in four quadrants, like now.

Then, I proceeded to a number of monuments. The first one was the memorial dedicated to the people who died in the Space Shuttle Challenger. Near to that was the mast of the USS Maine. If people remember this, the USS Maine was the US Navy ship that exploded in the turn of the century 1900’s and triggered the Cuban-American War. Depending on which textbook you look, you may doubt as to who caused the explosion. But this is where the expression Remember the Maine! comes from. This is a picture of it. 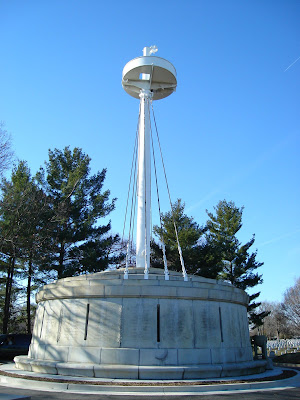 I also saw the place where Ignace Jan Paderewski, the Polish composer, was temporarily buried, until his remains were transferred back to Poland.

Then I proceeded to the amphitheater. This is a circular marble structure and it was very nice to photograph. And directly in front of it sits the Tomb of the Unknowns. A lone soldier walks by it all day.

After that, I headed to the Kennedy gravesites. There is an eternal flame that burns next to the graves, although the gravesite isn’t architecturally spectacular.

Then, my business with Arlington National Cemetery was over. I then proceeded back to the National Mall. I walked back and crossed the Potomac River. Upon crossing, the Lincoln Memorial was directly in front of me. So that was my next destination.

The Lincoln Memorial is a great marble building that attracts the eyes of architectural buffs and photographers to take pictures of it in different angles. I took plenty of pictures here, from the steps, to the marble columns, to the big statue of Abraham Lincoln himself, sitting inside the memorial. If you remember the movie Legally Blonde, this was where Reese Witherspoon sought advise from the marble President. Here is one of my takes. 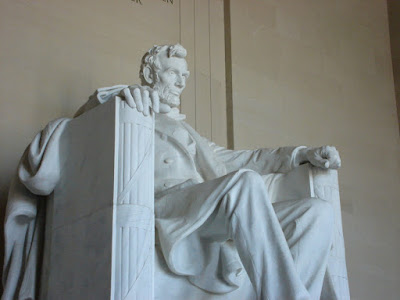 After taking sufficient pictures (yes, I took plenty, 962 all in all for my whole trip), I proceeded eastward. I then saw the Korean War Memorial. This is a memorial that is composed of a number of statues of soldiers in raincoats. They definitely were not happy. I took photos of several of them, and here is one. 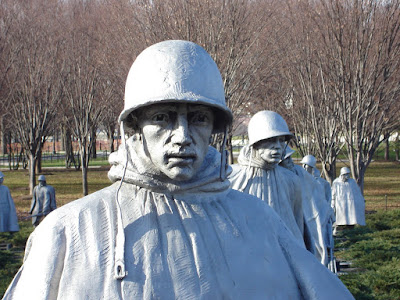 I then proceeded to the Tidal Basin, encircling it, walking under the cherry trees that are now leafless. I then stumbled to the Franklin Roosevelt Memorial. This was a nice memorial, not like others. It wasn’t built to be grandiose or anything, but instead, it was built with a feel of a museum. It consisted of four different sections, corresponding to his four terms in office. There are plenty of waterfalls and statues around the whole installation. Here is one of my shots of the plentiful statues inside. 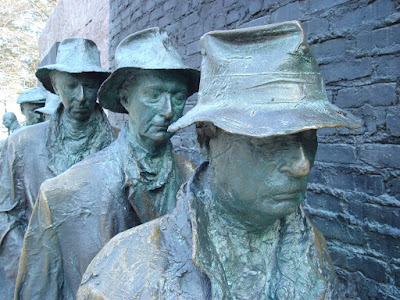 When I got to the other side of the Tidal Basin, I was the quaint little memorial for George Mason. This was supposed to be a flower garden, but then, it was winter, so there wasn’t anything growing. And the statue of George Mason was there, sitting on the bench.

Then, I proceeded to the Thomas Jefferson Memorial. This was another round marble building, similar to the Lincoln Memorial, but it has a dome in it instead. It was not very accessible, since it was on the Tidal Basin, not in the Mall proper. Thus, there were fewer people here, and I was able to take quieter pictures here, devoid of bystanders. This is one of my shots. 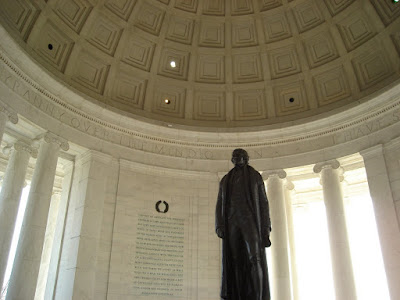 Finally, I walked over to the United States National Holocaust Museum. To visit this museum was very emotionally charging. One sees the cruelty of the Nazi regime to the Jews. It documents the progress of the Nazi effort to make Europe judenrein, or "jew-free". I saw the Jewish ghetto, the portraits of the sad people that composed them, and the shoes collected from them. I also saw the hair shaved from their heads. And I saw their final destination, the gas chamber. I saw men being subject to genetic experiments, vivisections, and other medical experiments that today’s standards would hardly approve of. In the end, I was clouded by a sombre feeling which made me wonder why humans could do this to their fellow humans.

So there, that was a long second day. Come to think of it, I guess I walked so many steps this day, that if I would plot my path in a map, it would have clocked some few miles. But then, I was a tourist, and one doesn’t notice this when one is enjoying oneself. 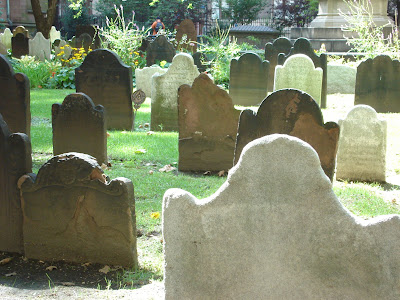 (Tombstones in color, from my Trinity Church Series)