Nothing much has happened today. I went to school to attend to a few things, but that was it. Nothing spectacular.

So, I went to school around 10:00 AM and met with another student who was working on his project, and he needed to record me, so we did that. Then, I went back to my office and finished writing my syllabus for next semester's class. I already have the 45 days class meetings scheduled and programmed; I have an itinerary for the whole 15 weeks of Spring 2008, and I have finished writing it in paper. I have set the dates for the tests and the homeworks, when they will be given, and when they will be due.

I saw a couple of my friends and told them about it, and they told me to relax and take a break. I then told them that I am taking a break next week; I will have a disappearing act next week and I will not be thinking of anything linguistics-related for the next week. But when I come back, I will be working again.

I talked to my folks this afternoon. They were asking me for confirmation about my sister's arrival in New York City. She is flying to the country, and as of this time, she is an hour away from touch-down.

Then she will kiss the ground.

Good thing she is landing in John F. Kennedy International Airport, and not in Buffalo, or else she will be kissing slush. 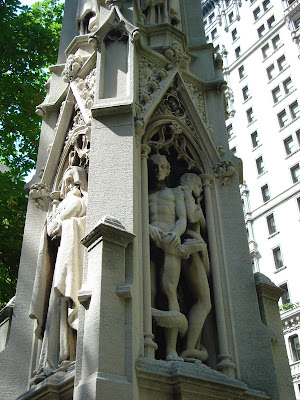 (Religious carvings once more, from my Trinity Church Series)