So, I got one week off. I have 14 weeks to go until the end of the semester.

No, I am not slacking off, I actually like what I am doing. But, it is simply interesting how the first week will go. One meets new people, new students, new professors. And for me, I did both. I met my students, and I also met my professors, although I know them beforehand.

In the case of my students, I have a feeling that I will enjoy this semester of teaching, compared to the first two times that I have did it before. We only have met three times, and yet it seems that I have loosened up the students already. They don't stare at me anymore, like they know nothing, rather, they are more open in giving their opinions to the class. Which is a good thing.

Yesterday, as a conclusion to a hectic first week, 8 of us went downtown and spent some time in a bar. I forgot what the place was called, but they had an impressive collection of beers from all over the world. I got myself a Spaten Optimator, manufactured in Germany. They had Czech beer as well which in my impression, is the best beer available, but they only had Pilsner Urquell, while I was looking for either Staropramen or Krusovice. Talking about nonsense for a few hours was indeed unwinding, after a packed week. Some of the random topics I remember was John Irving, Irvine Welsh, how to spot cheating in students, Dorian Gray, the Buffalo Philharmonic Orchestra, and whether one prefers boobs in a jar.

Yesterday was also the day when the first of several job applicants come to the department and meet everyone, and at the end of the day, give a job talk. I had lunch with him and had a chat as well. I like this one, but I won't delineate my full opinion about the candidate here, I don't deem my blog to be the appropriate place for that.

Anyway, I am ending this entry for now. I have two chapters to read, and I have some exercises to perform on a computer. 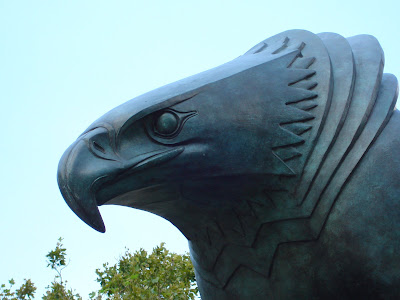 (Directly at the eye, from my Battery Park Series)