As I expected, things are supposed to repeat themselves, sooner or later. And with the passing of time, things that are bound to happen will definitely happen.

There are two major viewpoints in time, the linear model, and the cyclical model. Of course, there is the non-linear model as well, but I won't discuss that at the moment, and leave poetics and modernist literature by the wayside for now.

I guess things that are happening around me can be fully explained using the cyclical model.

I am here in my office. Pretty soon, I will be going to the main office of the department, and I will ask for a new door sheet. This is the thing that I put on my door so that people looking for me can see my contact information, what course I teach, and what are my office hours. And since there is the new semester coming up, I need to update it, and so I am getting a new one.

I will also go to the main office and request that parts of a certain reference book I use be photocopied and sent to me as a PDF. This will be for the references of the languages that I cover in the course that I will be teaching. I cover 76 languages during the course of the semester, and I want to change things around and cover different languages this time, compared to the two previous semesters that I have taught this course. This makes the course more enjoyable for me, so that I won't be discussing the same thing over and over again for the third time.

I will also start updating my database, since the new semester is coming up, and so I need a fresh slate in my hard drive. My periodic update and defragmentation of my gadget are also coming up, since I do that during vacation time.

Somehow, I feel that my days here in Buffalo are numbered. After all, looking at my past patterns of migration, I do not stay very long in the places that I consider home. I have to say though, that the longest stay I have so far in one locale is 6 years. This was between 1989 to 1995. We returned from Honolulu in 1989, and I have spent 6 years in Manila until moving to Osaka in 1995. So, given that trend, I should not feel that I will be leaving Buffalo pretty soon, since I have just clocked 2 and a half years here.

I know that sometime ahead, I should be content into settling in one place. But somehow, deep inside, I still crave the change, the moving, the packing, the whole enchilada that comes whenever one moves into a new place. And I am talking international, not just a move to the next county. After all, my move to Buffalo was my eighth move, I better be good at it. 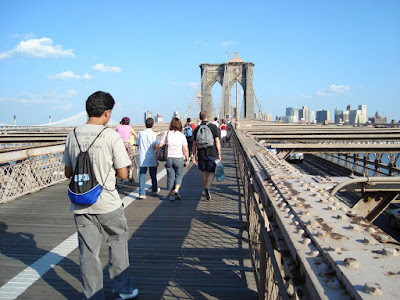