Yesterday, I found two pieces of mail in my mailbox here in the department (I prefer getting my mail in the office rather than at home; only one mailbox serves 7 names in my apartment, two for my unit, and 5 downstairs). I looked at it, and immediately smiled.

My Dutch friend sent me two postcards from his vacation. One was from St. Martin, and the other was from St. Barthelemy. Both were coming from the Caribbean. I was excited, and immediately posted both of them on to my growing wall of postcards here in my office.

Yes, I collect postcards. I realized that during the last 25 years of my life, I have collected a lot of stuff. Some I still continue on, others I have discarded along the way, having grown up and lost interest.

So let me see, I have collected Japanese telephone cards (I had a whole pile, really thick). They were always of a different design so it was interesting to look at. I also collected prepaid train cards, which also had different designs. I also collected train schedules of the different stations of Hankyu, Hanshin, and JR Lines in the area we were living back then. I also collected sheet music, since at first I thought I would make a living in music. I had three plastic containers full of them. I also collected fiction; I would usually go to the second-hand bookstore and buy tons of mass market paperbacks dirt cheap. And now I am collecting postcards.

I discontinued the telephone cards, the prepaid train cards, and the train schedules. I threw them away at some point. I passed the sheet music on to my friend in Manila who is training to be a classical pianist; he has more use to those than me. The books I still continue, but not as profusely as before. I only buy books if I really like them, and it doesn't happen most of the time. I usually end up borrowing them in the library.

But I don't think I'll stop collecting postcards for the time being. I actually am planning to fill my office wall with them, once I get my own dedicated office (of course, when I am done with grad school and is already a faculty in some university). I guess it just has something to do with my itch on travel.

Speaking of my postcards, I realized that with the addition of the Caribbean postcards, I now have more or less, all continents covered. I have a card from Melbourne (so that covers Oceania); a card from Bamenda, Cameroon (Africa); Seoul, South Korea (Asia); cards from Paris, Madrid, Dresden, Frankfurt, and Prague (Europe); cards from Quito (South America); and of course, I have plenty of cards from New York State, Toronto, and Washington DC (North America).

I already have cards from all six inhabited continents!

And the addition of the Caribbean postcards pushes the category further, further subdividing the landmasses. Thus, the St. Martin and St. Barthelemy postcards are representatives of the region of Central America and the Caribbean. I could further divide Europe, meaning that I already have postcards from both Western and Central Europe. Now given this division, I think I am missing a card from the Middle East. I will get one someday.

I wonder what my readers collect. Tell me if you do. 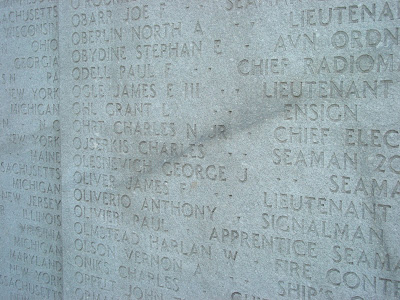 (Names in stone, from my Battery Park Series)