Yesterday night, I watched a concert by the Buffalo Philharmonic Orchestra. It's been a while since I went to a professional classical music concert, so I was looking forward to this one. The last time I watched a good concert was back in 2006, when I was in Prague and watched Carmina Burana performed by the largest ensemble I've ever listened to live. Aside from that, I semi-regularly attend concerts by the UB Symphony Orchestra, but I haven't seen a professional group perform in a while.

So last night, they performed Mozart's Violin Concerto No. 1 in B-flat Major. The soloist was a woman whose name I forgot, dressed in blood red, in contrast to the rest of the performers on stage who were wearing tuxedos.

I enjoyed the Mozart, but I simply am biased against Mozart's orchestral music. I don't like music that his period. The orchestra is small, it doesn't have plenty of energy that later orchestral works have. I also didn't like the fact that all three movements of the violin concerto has cadenzas in them. It sounded like it was overdone, but then, the concerto is a piece that was meant to showcase the talent of the soloist, and the cadenza is the part where that is most evident, when the whole orchestra goes silent, and for a few minutes, the violin is the only one playing complicated runs and trills. But, if I were to pick a piece to play, I would pick music from a later period, not the Classical period.

So that was the first half. The second half was Anton Bruckner's Symphony No. 9 in D minor. Now in my opinion, this was the better half of the program. Bruckner's symphony was very massive, domineering, and powerful. The orchestra decided to play just the first three complete movements; the fourth movement is incomplete, and Bruckner died before he was able to finish it.

Still, it was unlike any other symphonies that I have heard before. I guess this was my initiation to Bruckner's music. All I know about Bruckner is that his music is rather hard to play, and during my past life as a pianist, I never encountered his music written for piano.

The three movements were equally distinct, but all were bound by one theme, power. Every movement had a very muscular booming sequence, where the whole concert hall was in motion, and it felt like the stage was about to explode. It was very captivating watching the whole thing being played.

Anyway, so that was a rather entertaining evening for my part. I guess this is the reason why I don't watch movies in the theater anymore; I have plenty of substitutes such as classical concerts, musicals, and theater. Movies sometimes can be boring, true, they are hard to make, but all one does is sit down and pretend that one is part of a story taking place in the silver screen. Classical music is way more intense than that. 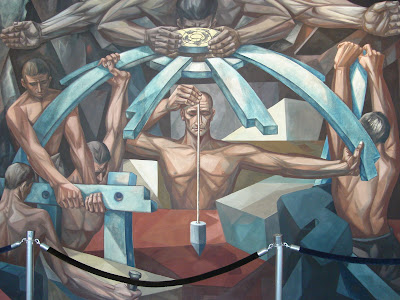