when everything is ok, or rather, seemingly ok, but then suddenly someone points a finger at you, immediately your body freezes and tries to process what is happening, you, me, yes, you, what about me, and the complaint flows, flows, until it overflows, much greater than Katrina, until it reaches every capillary I have on the tips of my fingers, and then suddenly you realize that what a seemingly innocent comment you made earlier, way earlier, aeons earlier, was misinterpreted and was taken seriously then what does one do, indeed that is the most important question, and even a copious flow of apologies has been issued both verbally and electronically nothing seems to change, of course, if the person was offended it isn't like a switch where it is simply an on and off thing, but then the fact that it grates your brain, it scrapes your skin, and it peels your power off your body, the fact that you know that you have offended somebody and that somebody has a card against you, if only you can reverse time and so the offense would not be committed, but then that is life, time only moves forward and not reverse, which brings a dilemma, since humans aren't predictable the fact that one was offended and had a violent reaction means that the predictions are wrong, what I thought to be the person's reaction didn't check out, instead a different reaction was seen, my god this is scary, interacting with people around me indeed is a scary thought, should I just clam up, mussel up, oyster up, or whatever bivalve shellfish one can think of, just in order to shut my floodgates and so that everybody would be happy, should one be silent, maybe that is the correct solution, because humans are all unpredictable, one cannot predict what one's reaction to one's comment may be, it may be better to just shut up if only I can read people's heads, and so I can know when to open my mouth and when to close it, sometimes it gets lonely at the top, that is apparently true, I didn't know people think of me that way, why, of all reasons, why, I am not superhuman, I do not read your thoughts, so don't expect me to act as if I know what is in your head, but then humans act like that, I wish humans had a sign on top of their head, neon possibly, or maybe LCD or other hi-tech gadget, displaying what's in their heads, so I can act accordingly, but then, humans were created to be complicated beings, and sometimes it just gets too complicated, what am I to do, I am afraid, afraid to open my mouth and express myself, otherwise some other catastrophe might occur, due to something I say, I'd rather not, possibly, just do my job, sit in here, and when the mission is over, I move on and proceed like the wind, which only passes by once, and the next one is a different wind, of course, yes, that is it, yes, that is the solution, yes yes, yes indeed, yes 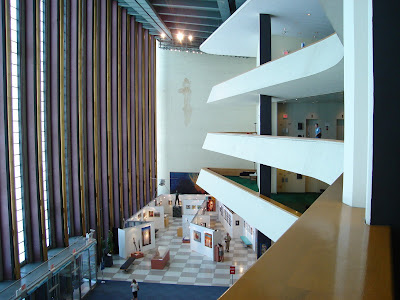 (The lobby, from my United Nations Series)