I don't usually have the school spirit. When I was in high school in Guam, I remember the time that every month, the first Friday was Purple and Gold Day (the school colors), and I usually don't pay attention to it unless the teacher was giving an incentive (say, extra credit), then I would wear the colors.

But, I couldn't let this pass.

My alma mater is now in existence for 100 years. So let me say congratulations to the University of the Philippines for its Centennial Celebrations.

After all, I've spent 3 and a half exciting years in this institution.

I've had fond memories in here, starting from the time when I lined up for my first semester. My first semester was in fact the second semester; when I came back from Guam, the first semester of the current academic year was already in session, and so I couldn't enroll for it. Good thing that I took the SAT in Guam, and so I was able to waive the entrance exam, and enroll in the second semester. I remember lining up in front of AS 101, with my Dad, while everyone already were doing the lines alone. Of course, during the first semester, many people came with the parents, but for the majority, this was their second semester, while for me, it was the first. It was so embarrassing, but, since I didn't know anybody, I didn't care in the end.

There was one semester in which I had to take a late-evening class, ending at around 7:00 PM. I live 2 hours away, but still, sometimes I lingered at the corner near Ilang-Ilang Residence Hall, eating isaw (Filipino-style barbecue). I'd buy a few sticks then catch a jeepney that would take me to Quezon Avenue Station of the MRT.

I loved exploring the campus for different eating establishments, and Chocolate Kiss in the UP Alumni Center was the best. I liked their chicken fingers; the sauce was incredible. Too bad I wasn't able to eat in Mang Jimmy's; people say that has the best ulam. Also, I would love to try the Tree House, near the Institute of Small Scale Industries.

The campus was wide, and was spread out. I miss riding the Ikot and Toki jeepneys that ferry the students in a circular route around the campus. I remember I took a tour during my first semester by riding an Ikot full-circle.

I also remember the rallies. UP students are known for their activist tendencies. There would be a rally at least once a semester, and classes would be disrupted, and the students would march up to the Presidential Palace. I wasn't an activist, all I could think of during those times were the possibility that I might not get home due to the lack of transportation, but still, those were exciting times.

It wasn't just me, it was the whole family. My father graduated from this institution, and so was my mother. And when it was time, I remember my mother telling my sister that she doesn't have a child who will never graduate from UP. That put pressure to my sister when she was taking the entrance exams; she even had a bout of diarrhea upon coming back from the testing center. In the end, all four of us earned a UP diploma. 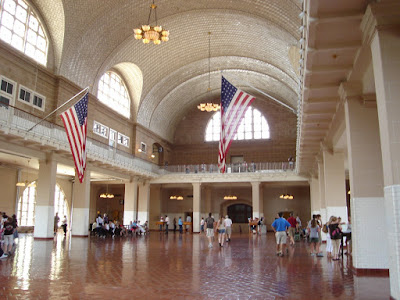 (The Grand Hall, from my Ellis Island Series)