A friend of mine invited me to attend a classical concert next week. But after putting some thought, I decided to decline it. I love classical concerts, however, I also like to vary what I watch. And given the fact that the university’s theatre department has a production that is coming up, I would rather watch that than another classical concert, which I already have watched two recently.

Too bad, although I like the piece that they are going to play. Apparently, they will be playing Elgar’s Pomp and Circumstance No. 1, and after that, Dvorak’s Cello Concerto. And I think that there is something else after that, but I am not really sure.

Perhaps many of you know of Elgar’s piece. This is rather popular due to the fact that this is also known as the Graduation March. It goes something to the effect of PAAAM-PA-PA-PAM-PAAAM-PAAAM, PAAAM-PA-PA-PAM-PAAAAAM, and so on. Even in Japan, this was the graduation march that is used. And I wouldn’t blame schools in using this, because it is indeed a very moving piece.

So, people here in the United States usually don’t like this piece, if this were the one that is playing at a concert. After all, why would you go to a concert simply to hear the graduation song!

However, I have a different view. If the timing was right, I would have gone to this concert, simply because this is playing. The reason is because I really find this piece moving, and I am very disappointed that schools in the Philippines do not use this as their graduation song.

Instead, they use Verdi’s Triumphal March from the opera Aida instead. So when I graduated from elementary school, I marched to the tune of a piece that was originally intended to be played while the loot of Ethiopia was paraded by Egypt. The triumphal march was played in the scene where the Egyptian army went back home and with them, they carried Ethiopian booty, so a performance of this opera consisted of horses and camels and other animals being paraded through the stage, and at the very end of the parade, was the Ethiopian princess, who happened to be the love interest of the Egyptian prince.

When I knew about it, I didn’t want to graduate as if I were booty being paraded across the stage! I definitely prefer Elgar to Verdi when it comes to graduation songs. 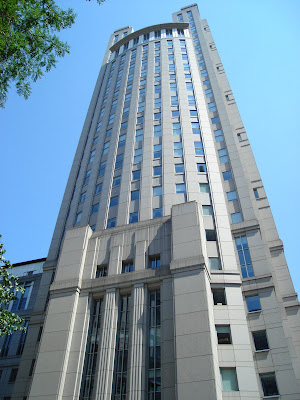 (The US Courthouse, from my Wall Street Series)