An Evening with the Tokyo String Quartet

Yesterday, I attended a concert given by the Tokyo String Quartet. I actually didn't plan to attend this, but I guess this may be my only chance of attending a concert by a well-known group in chamber music.

So, I was on campus on a Saturday afternoon, and I was working at the lab, and when I was done, it was around 6:00 PM. And I remembered that the concert starts at 7:00 PM. I didn't have tickets yet, and so I dropped my stuff to my office, and brought with me just a folder containing the tests of my students, and headed to Slee Hall, which is the building in campus that contains the Lippes Recital Hall. It was good that there are still tickets available, and it was also good that it is general admission, and that the seats aren't reserved.

So, I bought a ticket, and stood in line. Meanwhile, I took out my pen and started grading my tests. When they opened the hall, I was among the first to get in. And guess what? I got second row seats.

The program was an all-Beethoven program, consisting of his Quartet in D Major, Op. 18 No. 3, his Grosse Fuge, Op. 133, and finally, his Quartet in F Major, Op. 59 No. 1. This concert was part of a marathon of three concerts spread over two days by the Tokyo String Quartet, and the one I attended was the final third of a total of three concerts. These three concerts on the other hand are part of the Slee/Beethoven Cycle of Quartets, which is held here in the university every year. This means that different quartets come to the university and play Beethoven's quartets, completing the whole collection within a year. Apparently, this was the will of a rich couple who bequeathed money to the university specifically for this purpose. Apparently, even the order of the quartets were specified with regard to performing them.

Anyway, I've been here for almost three years and I haven't seen any of the Beethoven quartets yet, and together with the fact that it is the Tokyo String Quartet after all, it was too tempting not to go. So I went yesterday. And it was incredible.

Beethoven was a composer in the Classical Period, right before the Romantic Period started. So his compositions were highly structured, with a clear sonata form, and they followed strict tonal rules. The first and the third piece were like that. But I especially liked the second piece they played, the Grosse Fuge, because it was unlike any other Beethoven piece I heard before. I found it extremely engaging, with false starts, heavy counterpoint, multiple dissonant chords, among other things. It sounded like Stravinsky but it was Beethoven.

So, good thing I went ahead and attended the concert. It was a great way of capping the weird week that preceded it, with storms, high winds, and other things. 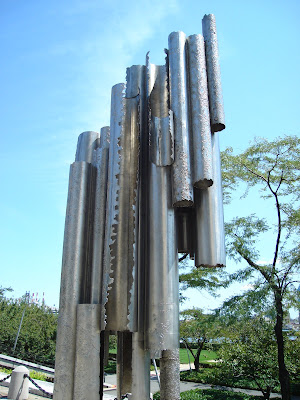