Last week, I said that I turned down an invitation for a concert. Well, I changed my mind and joined in the fun.

It turned out to be a good thing. I enjoyed sitting down and hearing Dvorak's Cello Concerto in B Minor played live. And yes, I also liked the opening piece, Elgar's Pomp and Circumstance No. 1 (aka. the Graduation March) played. That piece always raises goosebumps on my skin.

And this time, I dressed up. It is also part of the fun. You know, wearing your black leather shoes (despite of the February cold, and snow) together with dress pants and a long-sleeved shirt.

I saw some people in the audience that I recognized. I saw the logic professor whose class I dropped early this semester. I also saw the cellist later on in the lobby, signing CDs of his performance.

The one small thing that was annoying was that people still clap in between movements. I guess the program notes should indicate that it is not the proper way of clapping.

I remember the time when I learned that one should not clap in between movements. This was when I was in middle school, and I think the Osaka Philharmonic Orchestra performed for us, and I remember one of the pieces they performed was the Peer Gynt Suite, No. 1, and beforehand, the conductor told the audience (us) not to clap until the end of the fourth piece. Still, after Morning Mood, some of the students clapped, and the conductor just turned around and showed us his open palm. We were then quieted, and then the performance continued. And at the end of In the Hall of the Mountain King, we all clapped thunderously.

But still, I don't blame the people who don't know that protocol. Sometimes, the music is just so beautiful that people cannot help but show appreciation for it.

Ok, enough of that. 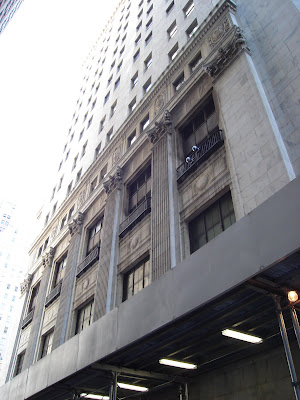 (Balconies, from my Wall Street Series)