I also had to conduct preliminary testing on the data, and see whether I could eliminate one or two of the interaction levels that involved random factors. Finally, I had to do a simple effects test on the individual levels of the factors.

So there, it wasn't hard, it was definitely doable, it was just very very tedious and long.

And now, we started on a new topic, and that was the concept of Latin Square design in experiments. I loved the idea, it was like a puzzle, where the Latin square involves having one symbol in each row and column. It was like a sudoku puzzle, only simpler, because sudoku requires one to have just one character per row, column, and box, while the Latin square only requires one character per row and column only.

Did you know that if you have a 6x6 Latin Square design, then there is a total of 9,408 possible standard forms, and together, these generate a total of 812,851,200 Latin Squares all in all?

It is indeed amazing to know these mathematical tools, and the fact that one can use these in experimental research is mind-boggling. I guess I am a late bloomer when it comes to math. I used to despise math, back in high school. I hated the subject, and I didn't like the lessons at all when I was in high school in Japan. I got low grades, perhaps due to the language barrier. I never thought that I would have a career that relies heavily in mathematics.

I guess my GRE score was a predictor. I had a very high quantitative score, and according to the evaluation sheet, I am more inclined to be in the engineering fields. But no, I am in linguistics, but I guess I am more into the mathematical side of this field, conducting experiments and designing complex designs, then evaluating them for theory-testing. 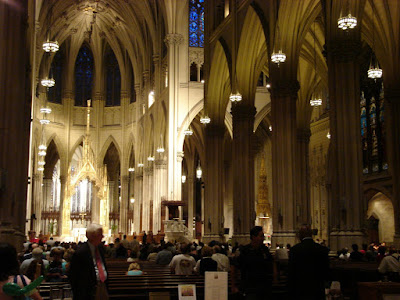 (Inside the Cathedral, from my New York City Series)