I guess some of you may know that I have a rather broad taste of music. I can be listening to Stravinsky’s Rite of Spring one minute, and the next thing that comes to my playlist after that is some head-banging metal by Disturbed. In fact, I listen to most of the genres out there, with the notable exception of jazz.

Anyway, back to my intended topic.

A few days ago, my good Russian friend who lives in Washington DC (yeah, he was the one I visited a couple of months ago) sent me a track of music by Max Richter. I sort of heard of the name, but never really knew about him. So I got the track, and it was called Sarajevo. I never really listened to it with my utmost concentration, until yesterday.

I was speechless. I played it over and over again, full volume. And every time I do so, I cannot help but feel the lament, and the hairs on my arms stand on its end. There is this wailing tone, that just goes through 3 consecutive notes, starting from the middle, and one goes down, and the other goes up. It just goes like that over and over again for the whole duration of the piece, while the orchestra slowly appears from the background, until the fortissimo builds up, and then it fades.

I do not know the instrument that produces the wail, but it seems that it was the human soprano voice, sung in the higher registers.

And for four minutes, the tragedy of Sarajevo just permeates all throughout, with that three note melody, and an orchestral background. As it starts slow, and goes faster, and fades slowly, one hears of the drama, the pain, the suffering, the sorrow.

The strings first start to appear with this triple-note motif. Then, it goes faster a bit, hitting the accelerando with a sextuplet-note arpeggio. There also appears a bass counter melody against the arpeggios, played by the cellos and the brass section. As the ocean of pain sweeps the listener, the three-note wail remains, appearing again an octave lower this time. The orchestra disappears, and what remains is the wail, accompanied by a lonely harp, and it fades out. 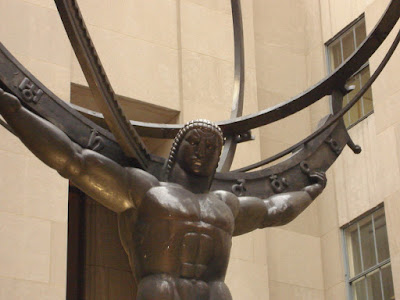 (The Face of Atlas, from my New York City Series)