Pretend This Isn't the Title

I just don't have an appropriate title for today's entry.

So, I didn't blog for two days. I guess I was just tired from the whole conference event. I got back yesterday, but the conference ended Saturday. The thing is, it was only three days, but the program starts at 9:00 AM and ends at around 8:30 PM, since there still is a poster session after the talk session.

So there, and then, I had to wake up early Sunday morning, in order to catch my return flight. I was still tired, and waking up at 3:30 AM did not help. I called a cab beforehand, and so I checked out of my hotel, then proceeded to another hotel in order to pick up my adviser (because we were staying at two different hotels) and then we proceeded to the airport. The good thing is that he paid for the cab and he will have it reimbursed.

So we checked in, grabbed a breakfast in the airport, and then once we were airborne, I decided to read a novel. I wasn't sleepy then, but 20 minutes before the flight ended, I felt sleepy, and I actually didn't realize that we were already in Cincinnati until we touched down and I felt the bump.

So we connected, and I exchanged a seat from the person sitting next to my adviser, so that we ended up sitting next to each other. That way, we were able to continue the discussion. We discussed the next possible experiments, and the pros and cons of all the options.

I then was picked up by a friend of mine, and then when I got home, I just took off my clothes and plopped in bed.

I woke up at around 4:30 PM. But even if I had that long nap, I never had a problem going to sleep last night.

So there, that was my weekend.

All in all though, I liked the whole experience. Being in a gathering of the world's best neuroscientists, cognitive psychologists, psycholinguists, and experimental linguists was a blast. It gave me perspective of what is currently being done in the field. I also made some connections with other people, people who I might tap for help for my own research.

So there, I am back on terra firma. I gave an exam to my students today, which may be cruel. So yes, I won't schedule an exam on the day after the Spring Break from now on. 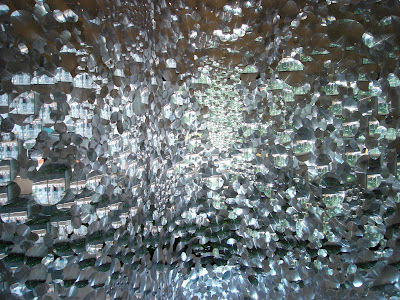 (Crystals in the Guggenheim, from my New York City Series)