Life is slow during the Spring Break. Nothing interesting happening, so far.

So I went to my office, and answered some e-mails. I also asked for my adviser, who happened to be around, and apparently, I don't have anything else to worry about for the poster, since it is already taken care of.

So, here I am in the office, doing some reading, and when I get sick of my reading, I shift to my novel. I still am working on Eco, but I am almost done. From time to time, the snow that was gathered in the windowsills fall and with a thud, they crash on the ground.

I also called my airline and reconfirmed my flights for Wednesday. Looking at the weather forecast, nothing undesirable is on the list, so hopefully, I have an uneventful flight. I will bring my camera down there so I can have another bunch of shots of North Carolina in the spring. The thing is, I am arriving there the day before (the conference doesn't begin until Thursday), and my flight arrives around noon, so I have a full afternoon to waste. I will walk around the spacious campus of University of North Carolina and see what scenery they have to offer to my point-and-shoot.

I wish something interesting would happen soon. Like for example, look at the people in this video.

This is the music video for Paralyzer, a song by Finger Eleven. I was listening to the car stereo the other day, and I heard this, and I sort of liked it.

Imagine if the people around you would generate additional people from their bodies. It would be interesting if our world were like that. But then, that would violate the laws of physics and so in the long term, I don't think that would be desirable. 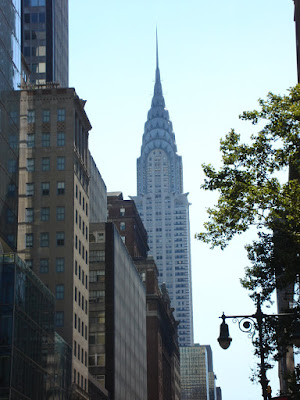 (Chrysler from afar, from my New York City Series)