So, today is April 1. I better watch my back.

The reason is because it is April Fool's Day, and people might play tricks on me. I remember last year, I was in a friend's house, and they invited me to have soup. There was a bowl of soup in front of me. I was talking, but my hosts were more than eager for me to lift the spoon in the soup and start slurping, up to the point that they said, "Try the soup, dammit!"

When I did lift the spoon, the spoon was a weird one. It had a hole in the middle, so I couldn't lift a drop of soup.

So there, due to the fact that today is April 1 again, I am trying to be careful. Yeah, the 91st day of the year sometimes can be tricky.

If you look back, a lot of significant events happened on this date. There are a couple of decisions that makes the Netherlands different from the rest of the world that happened on this date. In 2001, the Netherlands legalized same-sex marriage, and became the first country to do so. The year after that, it also legalized euthanasia, and again they were the first country to do so.

April 1 was also the date in which Iran became an Islamic Republic, and the Shah was overthrown.

April 1 was the date of birth of two noted composers, Ferruccio Busoni and Sergei Rachmaninoff.

And locally, April 1 is the first day here in Buffalo to experience 60 degree weather! Yay! I am happy, and people around have started wearing short-sleeves. Very nice. Welcome spring, it's about time. 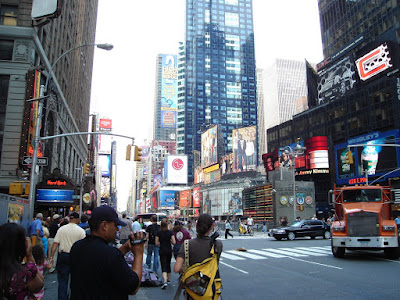 (Times Square in the Afternoon, from my New York City Series)