Regardless if I were a linguist or not, I am a huge advocate of pro-active independent travel. This includes taking the initiative to learn the local tongue, whenever one goes somewhere. Because even if you do not do a good job of it, the simple fact that you tried may go a long way.

Now why am I advocating that travelers take the effort to learn the basics of the local language? Well, for a number of reasons, and I will explain each of them.

First and foremost, one should recognize the fact that travelers are and always be visitors. Put bluntly, we are intruders. We go into their countries, and in a way, disrupt their society. It would just be fair to try to minimize the friction between the visitor and the visited, by not imposing the burden of communication to the locals. If they cannot understand you, then it is not their fault, but rather, yours. I have seen quite some of these obnoxious tourists in the places that I visited, taking on the tone of the "offended tourist" just because the cafe did not explain what the cost was, or what was included in the price. If the tourist knew the language, or at least the basics of it, then problems such as those could be minimized.

One might say that people who are in the hospitality business should take the initiative to learn a foreign language. But that does not make of a good argument, since one could say that there are plenty of foreign languages out there that can be learned, and it is simply impossible to learn them all. Indeed, it is less impossible for the visitor to at least try to communicate in the local tongue.

Secondly, it would make one's visit more enjoyable. When I was in Prague, I needed to learn a few basic phrases in Czech, and it was useful in buying the train tickets to the countryside. In order to buy tickets, one must talk to the station personnel, most of them were elderly, and aside from Czech, the language that they most probably know of is Russian, and not English. I told them in broken Czech that I needed a round-trip ticket to this-and-that, and it made my trip possible. I finished the transaction in less than five minutes.

Thirdly, the local people will treat you more nicely. Believe it or not, the ability to say hello and thank you in the local language goes great distances. They will smile back, and appreciate the effort that you have put forth in order to learn basic greetings.

Finally, not all places use English as the lingua franca. In Latin American countries, believe it or not, even the people who stamp your passport with an entry stamp, those people who you would assume meet people from different countries every single day and need to communicate with them, not even them can speak English in a conversational manner. And it is not their fault. They just do not need it. After all, they do not require visitors to visit their country in the first place. Thus, my point is, sometimes, it is not just optimal, but rather, extremely recommended, that people learn to talk the talk. The world is a big place. One loses a lot if one limits oneself to English-only locales.

All in all, I believe that trying to communicate in the native language will make a better experience for the traveler. Try it next time you buy a ticket overseas. 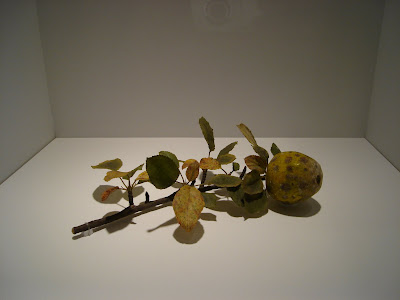 (Another Fruit, from my Corning Glass Series)