Language is Futile When You Drink

This weekend was a sort of chance to rewind and unwind. Relax and be lax.

Last Friday, I watched a free movie in the student theater. I can't remember the last time I watched a movie in the theater. Anyway, we watched National Treasure: Book of Secrets and it was a great adventure movie. The only cringe I have is that some of the things that happened in the movie cannot happen in real life.

Like the fact that one day, the villain, Ed Harris, was in New York City. He was trying to pursue Nicholas Cage. He learned through a cloned phone that he is heading to London. Nicholas Cage was in Paris at that time, and it was indeed plausible to be in Paris in the morning and London in the afternoon.

What was impossible however was that Ed Harris met Nicholas Cage in London at that same day. Ed Harris was supposed to be flying eastward, and one cannot be in New York City in the morning and end up in London in the afternoon. If one calculates the time zone, that will not make sense.

Anyway, overall, the movie was great.

Yesterday, I was still working on my Field Methods paper in the afternoon. Good thing it is almost over. I got a call from a good friend of mine that they are going out in the evening, so I tagged along.

Anyway, so we had dinner and quite some drinks. The topics of the conversation were weird, and it gets weirder when people drink.

One of the topics was that language is futile. This was started by the American girl with the weird accent. She said that it would be her life's goal to prove it. But then, she also has another goal, and that is, to insert "to google" in the French vocabulary. So, it would come up like "googlé" (rhymes with Michael Bublé).

Anyway, there was one more. It had something to do with Robin Williams (or Tim Robbins, I cannot remember) saying with a French accent, "I am French, I don't care, I give a cigarette to the bebe." I tried to search it if it were some skit or not, but I cannot find it.

Due to the fact that the music was loud, sometimes I couldn't hear what the other people were saying. So I do good-enough processing. I told one of my friends to tell me something interesting, and she said "Two-thirds of Americans think we're in a recession." I repeated it saying "Native Americans have weird intersections?"

So there, it was a crazy night. Enjoyable, however. We left around past midnight, and I jumped to bed to retire. 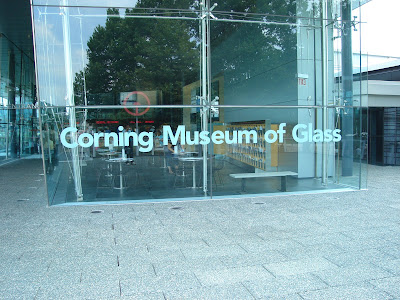 (The Entrance, from my Corning Glass Series)