Wake Up, It's Spring

I saw another play in the university theatre again yesterday. I guess it was a nice way to wrap up the semester by going to the theatre and watchign talented young actors perform.

So the play I saw was Spring Awakening, a play written in 1891 by German playwright Frank Wedekind. It's not a typical play you would want to accompany your grandma to. And there were aspects of the play that I liked and disliked.

First of all, I am amazed that Wedekind was able to write this play, during his time. The play was hugely censored and banned, and it wasn't produced much, due to its content, which violated norms and mores of 19th century society. It was a society in which teenagers were taught that babies were delivered by storks, among other things. It was a protest against the hierarchical oppression against the youth.

One of the most memorable scenes was when Wendla was asking her mother how babies are made. Her mother's answer was simply that one must be married, and love her husband as much as she can. Her mother's performance was stunning, and the audience applauded in this part. Later on, Wendla gets raped by Melchior, but she obviously does not grasp the weight of this event. Further on, Wendla is shown in a scene in a clinic, pregnant. Her mother tells her that she only has anemia and she will be fine, but later on tells her that she is pregnant. Wendla is confused and does not know how that happened when she doesn't have a husband and hasn't loved anyone intensely in order to have a baby.

Another part of the play that I liked very much is the philosophical outlook of Melchior, who doesn't believe in goodwill. He believes that humankind is inherently selfish, and would only do things if it benefits oneself. He meets Wendla once in the woods, and asks her why she goes and visits the homeless people, asking whether Wendla would still go if she doesn't feel happy doing so.

I totally understand why this play would be censored back in 1891. When authorities opt not to be awakened and see reality, opting instead to fool themselves into believing that repression and not proper education is the solution to society's problems.

The only thing I do not like about the play was that the sets were not too defined. They used upside-down floating umbrellas to signify various things, trees, woods, tombstones, among others. The transition was a bit too abrupt, and I guess I was more of a visual person, and I needed more imagination in order to appreciate that.

Overall, however, I am pleased with the whole experience. Once again, I am impressed with the talent of the actors of the Theatre department. It was stellar. 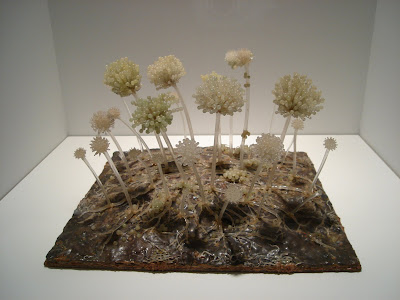