So, my second day begins quite early, as in real early. For one thing, I had a flight from Bogotá to Lima that leaves at 9:55 PM, arriving in Lima at 12:50 AM. Everything was on time, on schedule, which was amazing. There were funny things that happened in the airport, so let me recount them first.

Well, there is the trio of retired Americans who don't know a word of Spanish. It was pathetic and funny watching them. Colombia requires everyone who flies to, from, and through the country to give an address. One does this by filling up the form on the back of one´s boarding pass. And sad to say, the form was all in Spanish. It was on a level I can handle, but they obviously cannot.

So, when the ground staff checked their boarding passes and explained to them that they should fill it up, they went ballistic and claimed that someone should interpret it to them. I know that Avianca should have English versions as well, given the fact that it is an international airline after all, but I disliked the attitude that the Americans gave. I couldn´t help approaching them saying I can translate.

We talked for a while, and I learned that they have been to many different places the moment they retired. However, English is the only language they know. Pathetic. I reflect on their case comparing it to mine, when I am here, using my little known Spanish, but supposedly enough to converse with the taxi driver and shoot the wind with him, as I just found out this morning. I also try to speak in Spanish even though the people who talk to me respond in English. After all, how would my skills improve?

I had been drinking coffee, starting with the meal in my flight from Bogotá to Lima, and on my flight from Lima to Cuzco as well. I had less then optimal sleep, and I need to be awake. At least, now that I am checked in a hotel, I can bring my sleep pattern back to normal.

I got to my hotel at around 7:00 AM, but as of that time, my room is still occupied, until 11:00 AM. So I just left my luggage in the lobby, and went to the train station to buy my train tickets that I will use later in the week. I also booked a city tour with one tour operator. This is the only rip-off that I was a victim to, which I will explain on a later blog entry.

Ok, I usually do things on my own, but I will be joining a tour just for this one. I just arrived, and I am still getting used to the altitude, so I am taking things slow. Thus, the van that the tour operator has is very handy. Besides, some of the sites that the tour covers are explicitly mentioned as dangerous for solo travelers, so I am joining a group to prevent a tragedy.

I am sitting on an Internet café near the Plaza de Armas, after drinking a complimentary mate de coca from my hotel. I guess it does relieve altitude sickness. It has a weird taste, something that I don´t recognize. Of course, why should I, I haven´t tried cocaine before, which happens to be derived from the same plant.

Then, I spent the day strolling Plaza de Armas, and its surrounding buildings. I also visited some museums. It is a Sunday, so most of the other attractions are closed. So, I visited the open ones and took photos of the rest of the city.

This is a shot of one of the narrow streets in the neighborhood of San Blas. 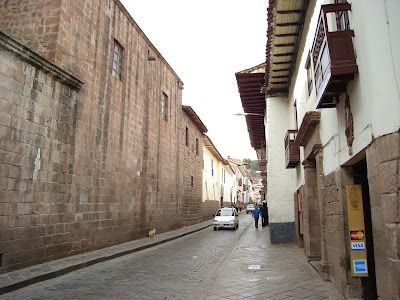 This on the other hand is a shot of the courtyard of the Palacio de Inca Roca, which is now a functioning museum of colonial art. Unfortunately, I wasn't allowed to photograph the exhibits, so I was content on taking photos of the lovely courtyard instead. 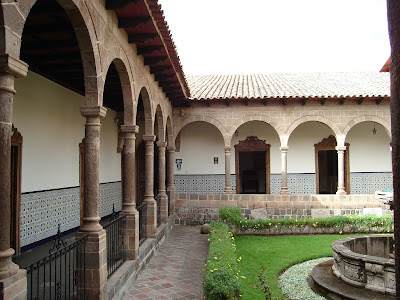 This is a shot of one of the Inca walls that are still in use in the city. This is actually the outside wall of the Palacio de Inca Roca. Can you spot the 12-angled stone that the Inca used in this wall? 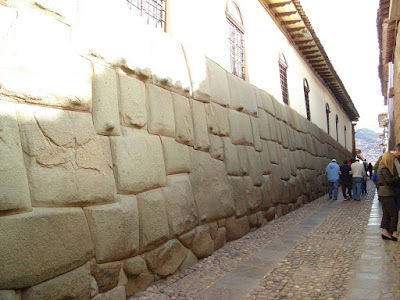 This is a photo of my hotel, which is also old, situated in a colonial structure with a courtyard as well. I guess the theme for the colonial houses here in Cuzco is the fact that it should have a courtyard and a fountain in the middle. I stayed in the room called "Luis", which you can see in this photo. 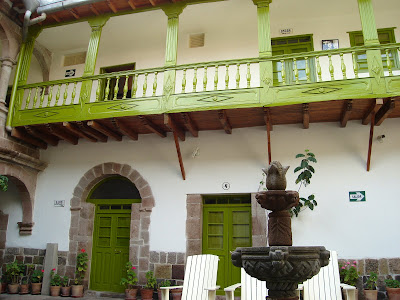 So there, I obviously did not over-exert myself for this day. I was still acclimatizing with the altitude, and climbing the steps in the neighborhood of San Blas alone made me breathless.