For this day, I checked out of my first hotel. I was feeling a little bit unwell, so before I headed to the bus station, I went to a local pharmacy, and requested some over-the-counter medicine for altitude sickness, in which I was experiencing a slight fever, nausea, and headache. I was given two kinds of tablets, and upon taking them, I felt better.

I then proceeded to the bus station that goes to Chinchero. If you check my previous scheduled itinerary, I should stop by Chinchero and visit the archaeological site there. However, it was raining, and so I put on my rain gear, and wrapped my backpack with its rain gear as well. And since the bus that I was on was heading to Urubamba, where my next hotel was, I decided to just go ahead and head straight to Urubamba.

Once in the bus terminal in Urubamba, I found the next mode of transportation that I was going to be needing, that is, the mototaxi. This is a motorcycle that has a passenger cabin attached to it. Similar to what we have in the Philippines as a tricycle, this is common in rural Peru I suppose. I took a mototaxi and asked him to take me to my hotel. It turned out that my hotel was hidden deep in the mountains. I had to take a dirt road in order to get there. It was the perfect getaway. 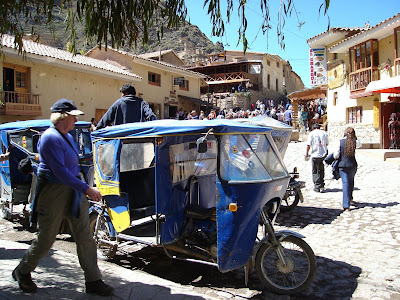 I normally do not post about my hotels, but this one is simply different. They are extremely personalized, and the owners are there mingling with the guests. I felt like a real house guest, not just another customer. The owners themselves prepared our breakfast, and they arranged for my excursion to the two sites that I visited that day.

This is a picture of my lodging. Very rustic, and it felt at one with nature. 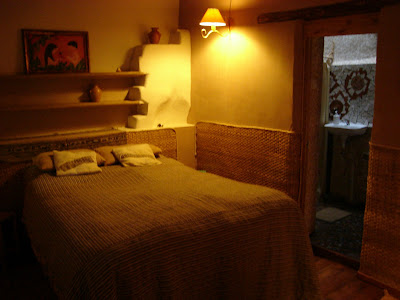 So, the sites that I visited today were the Inca experimental site of Moray, and the Inca saltmines of Maras. Moray is a bizarre X-Files-type location. It looks like a landing site of a UFO. But apparently, it was the location of a scientific experiment by the Incas. They have carved these huge bowls in the earth, and then tested whether the plants would grow differently in the different levels, because apparently there are different climates for every level. They used flying steps to ascend and descend from the different levels.

This is an overview of the place. Very fascinating stuff. 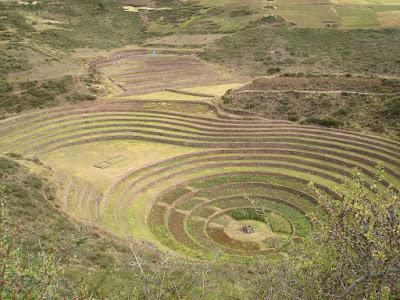 See their magnificent use of the "flying steps", which are Inca stones protruding from the walls? This is how they climbed up and down the different terraces. One can see this in the other Inca sites that I visited as well. 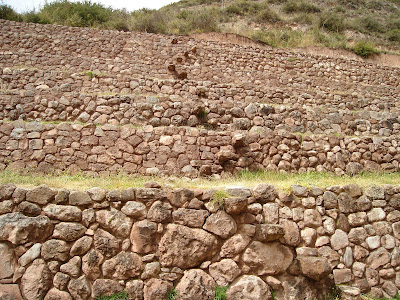 The next site was one of the most amazing sites I have been to. This is the salt mines of the Incas, carved in the mountains. People may be familiar of the rice terraces that can be found in Southeast Asia, but this one is different. The view alone is magnificent. It is like liquid gold, shining on the mountain side. Walking through them was a magical feeling. Totally unreal.

Look at this photo and you'll understand what I am talking about. 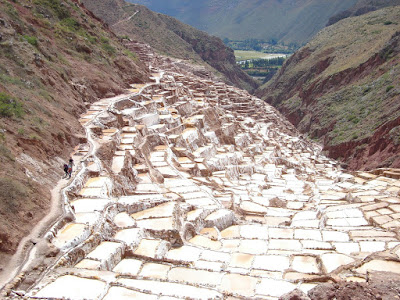 I was then tired by the time I finished visiting these two sites. So, after the taxi that was arranged to take me to these sites returned me to my mountain lodge, I feel asleep. When I woke up, it was around 6:00 PM.

Now, the next problem was about dinner. My lodging was located deep in the mountain side, and it was already dark. The center of the town was 3 kilometers from my current location, and still, one needs to walk at least a kilometer to the main highway if one wants to find a mototaxi.

The good thing was that I was not the only one who was looking for food. A couple came out of their lodging, and was on the same situation as I was. So I met Peter, from Hungary, and Lea, his partner, from France. They were on their 5th month of traveling, Peru being their second to the last stop (Colombia is their last), before they head back to Brussels, Belgium, where they live. If you are curious as to how their itinerary looks like, then check their blog here.

So, a Hungarian, a French, and a Filipino headed out and decided to explore the Peruvian countryside. Good thing Peter had a flashlight, and so we walked the dirt roads of Urubamba. We then stumbled upon a few stores owned by the Inca, complete with the women with their beamed hats, and signature skirts.

In the end, we bought an avocado, onions, tomatoes, linguine (which was marketed as spaghetti, but what do Peruvians know about pasta?), hot peppers, bread, beer, bananas, and oregano.

We then went back to our lodgings, and then we used the kitchen. Peter made some killer guacamole, spread on top of the bread that he toasted beforehand, while Lea had whipped up tomato sauce for the pasta. So there, we did some home cooking for dinner. I ended up washing the dishes.

So that was my fourth day. Watch out for tomorrow when I totally underestimate the sun's power and I get badly sunburned while raiding an Inca temple.