Day 5: You Cannot Be Inca If You Have Acrophobia

I woke up to the sound of the river running next to my mountain lodge. I went to the common area, where I was greeted by Chalo, the Chilean owner of the whole complex. He himself was preparing breakfast for everybody. Apparently, I was the first one up, and he asked me where I was heading to.

So, after breakfast, I walked the 3 kilometers to the bus terminal of Urubamba. My original plan was to head to Chinchero, because I was not able to get there yesterday. However, Chalo told me that Chinchero is small, and so I should plan to visit something else after that. So, after some thought, I decided to board a different bus and head to Pisac instead. According to my original plan, I would be visiting this site the following Sunday. But it turned out that it was better this way.

I boarded the bus, and after an hour, I reached Pisac. I then walked to the main plaza, and immediately found the entrance to the trail that would lead to the Inca citadel on top of the mountain. I showed the guard my boleto turistico, and told me that one of the other guards would be accompanying me.

This is the view of the mountain that I would be climbing, of which, on the top, is located one of the most spectacular Inca ruins aside from Machu Picchu. 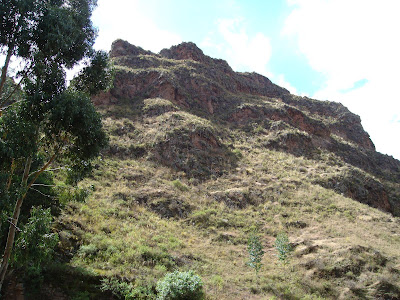 This is how the start of the trail, riddled with steps and other ascending climbs, looked like. 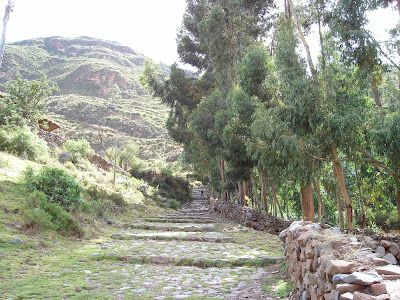 It turned out that having company in Pisac was a good thing, since the trail was very steep, and a little bit confusing. It took me 2 hours to reach the summit. I was huffing and puffing, taking plenty of rests along the way. I had plenty of occasions in which a wrong step could have resulted in my death.

This is a shot mid-way. One could see how high I already am, judging by the Inca terraces, but still, the Inca citadel was nowhere in sight. 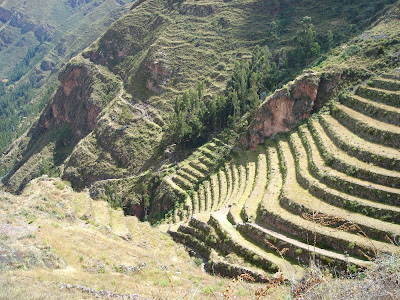 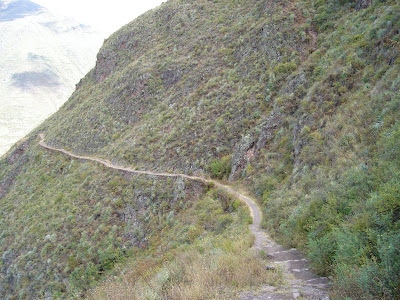 Then I come across this Inca doorway. Finally! 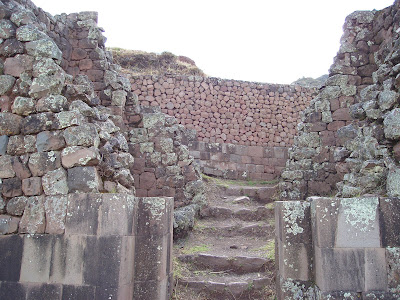 Upon passing this doorway, I stumbled upon a collection of ruins, on top of the mountain. This is a picture of a certain hallway, curved to follow the curvature of the mountain, upon which many rooms branch out of. 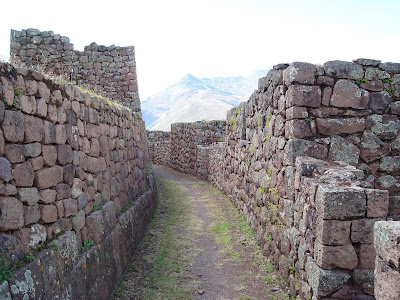 And when I went higher, I saw some more complexes of ruins, such as this one. 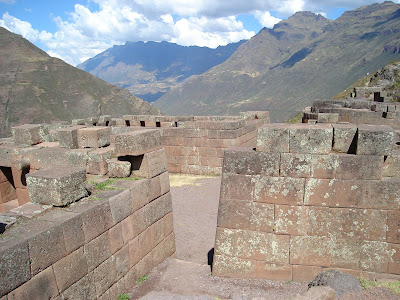 I have come to realize that the Inca were never acrophobic. If one were, then one could not inhabit the lofty citadels that they built on top of the Andean mountains. I asked my guide (who kept calling me Robert) why they built these citadels on the mountaintop and not on the valley below. He told me that the main reason was the flooding that occurs.

So, after two hours of ascending, and a sunburnt neck, I finally reached the summit. My goodness, I wonder how the Inca managed to carry the tons of stones that they used to build the majestic site. I also saw the Intihuatana, the polished stone where the Inca believed was the site where they tied the sun, so that the sun would not go away.

It was a magical experience, ascending Pisac. I never imagined that I would be trekking an Inca trail to a citadel located in between huge mountains, overlooking a valley considered sacred.

I finally descended, with the help of my guide of course, which actually saved me. I was idiotic not to bring bottled water. If he was not there with me, I may have dehydrated. I actually cramped a few times while descending the trail. Around 3:00 PM, I was back at the main square of Pisac, and I found a restaurant where I ate a late lunch or early dinner. I then caught a bus back to Urubamba, and headed back to my mountain lodge.