Yeah, I had dinner in Ollantaytambo, and went back to my hotel. I jumped in bed, and decided to get some sleep, given the fact that I was temple-raiding the afternoon before, but nothing came. I was tossing and turning in bed, but I could not fall asleep.

So, in order to lighten my load, I left the finished book in my hotel room. After all, I just bought it in a used-book store about a year ago, and never touched it until now. Good thing it was not one of those books I borrow in the library, or else I have to return it to the library, thus adding to my load. I guess that was why I never read it until now, when I know that I would be needing it for my trip and then I would finish it sometime while I am traveling.

So I think I got some sleep at around 1:00 AM, and woke up at around 5:00 AM. I got up early because my train ride leaves at 7:00. I then checked out and walked to the station, which was just 5 minutes away.

This is a shot of the train station in Ollantaytambo, where the mountain is very close by. 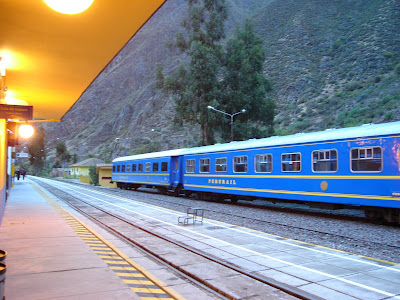 The mountain is very majestic from this point, as you can see in this photo, when the clouds reveal the rising sun. 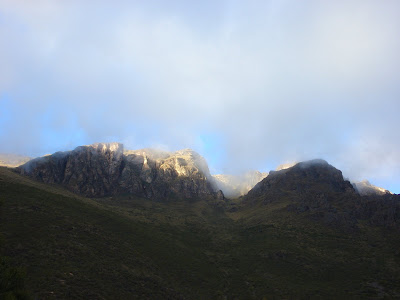 I boarded the train, and it was one of the most beautiful train rides that I have experienced. The train that links Machu Picchu and the rest of the towns in the Sacred Valley is one of the highest in the world, with the Tibetan Railway as the highest. It was a very beautiful experience, riding a train in between the towering mountains of the Andes, both left and right.

This is a random shot of the scenery, with the Urubamba river following the tracks. 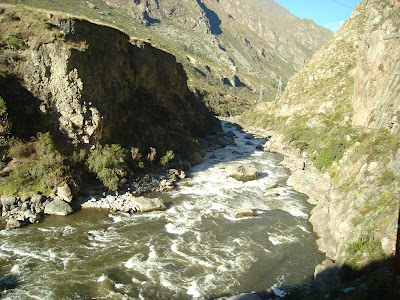 One can see Inca sites that can only be visited if one actually walked the Inca trail, which is the road system that the Incas developed during their time, where one can reach Machu Picchu from Cuzco in four days of walking through the mountains. 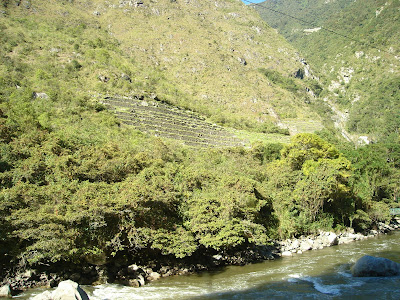 So after an hour and a half, I arrived in Aguascalientes, the town at the foot of the mountain that has Machu Picchu. I immediately found my hotel, deposited my backpack, and headed to the ruins.

I found the ticket office to the ruins (one must buy an entrance ticket to the ruins before heading to the mountain), bought a discounted ticket (due to me being a student), and headed to the bus station where the buses that ferry the people up and down the mountain wait for passengers.

The bus ride was amazing too. I am impressed at the drivers, who are able to navigate the steep switchbacks that are carved at the edge of the mountain, so that they can climb the mountain and reach the ruins. There is a hotel at the entrance of the ruins, a luggage depository, and some restrooms. I then got out of the bus and proceeded to the entrance.

Wow. It took me two years of planning in order to reach this place, the Inca ruins that the Spaniards did not even have an idea it existed. Of course, I took plenty of photos here.

Here is the classic shot. Believe it or not, it took me two full years in order to compose this photograph. 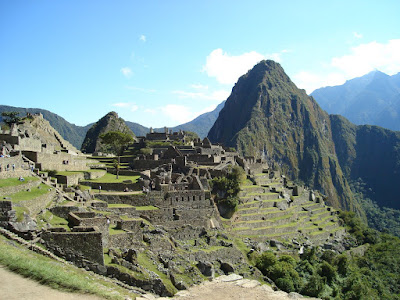 Machu Picchu is an amazing place. It indeed is a city, with different sections. The following shot is taken from the agricultural section, with its extensive terracing. 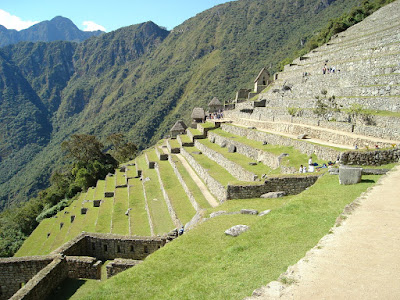 In order to discern how high the place is, look at the following photo, which is taken at my eye-level. 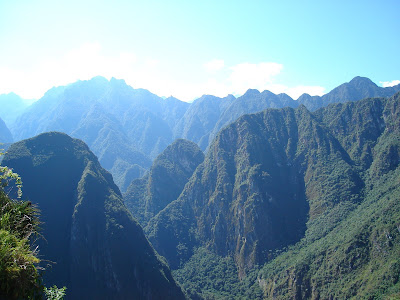 This is the typical Inca structure. The more polished it is, the more sacred. In the artisan's section of Machu Picchu, the structures are not as polished as the ones in the ceremonial section. 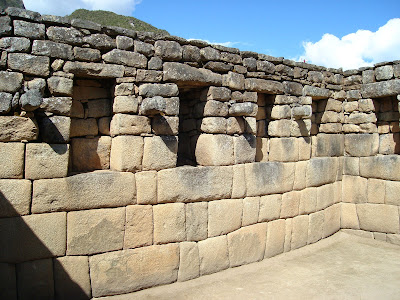 Compare the photo above, which was taken in the industrial sector, with the photo below, which is a photo of the collapsed corner of the Principal Temple. The Inca has done a better job in cutting and polishing the stone bricks here. 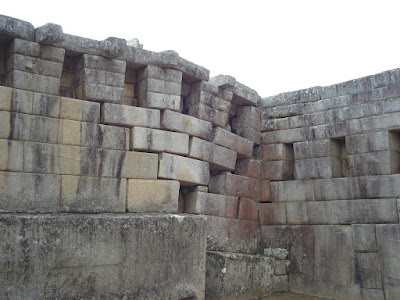 This is a picture of the Industrial Section and Huayna Picchu, taken from the Ceremonial Section. You can see the Artisan's Wall, where the grand staircase begins, and the large terraces leading to the top. 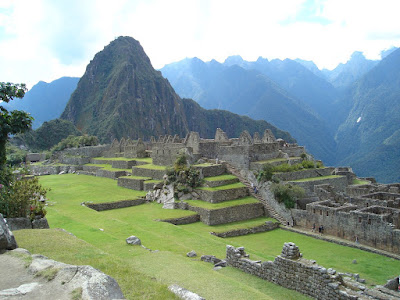 So there, after spending the whole afternoon meandering and exploring this lost city, I turned my camera into off, given the fact that I have taken more than 400 photos of this place, poking my head into every entrance, climbing any available staircase, and rediscovering the city that was once lost and hidden from humanity.

I cannot believe that I would actually visit this place, in my lifetime. As corny as it may sound, I was almost in tears while I was on the train on my way. Although I do not believe in New Age-type supernatural experiences, I have to say that the experience was mystical. To an extent, it was spiritual.

It made me think why I take these trips, where I lose myself. Last year, I went to Ecuador and climbed a couple of mountains. This year, I went to Peru and lost myself in the Sacred Valley. It made me wonder what exactly is the purpose of my trip. And I guess, it was a trip to escape. To escape from the routine of daily life. Do not get me wrong, I love what I do, I love what I do for a living. However, sometimes, one just gets into this routine like clockwork, that one sometimes feels numbed.

People sometimes bite their fingers in order to stay awake. I guess, in a similar vein, I go and travel great distances, and follow dangerous trails, where one wrong step can lead to my untimely death, and climb the peak of mountains. I guess the sense of danger in these situations, the rush of adrenaline that comes with it, the thought that one is in the wrong continent, surrounded by people speaking a different language, all of these factors combined confirm the fact that I am alive. That I am still here.

I have told people that I prefer Washington DC than New York for the reason that I feel dwarfed by the skyscrapers in New York City. Here in the Sacred Valley, I am dwarfed as well, but in a different sense. I see these mountains on my left and right, and I stand at the middle of the road, alone, lost, in a sense, and I cannot help feeling that I am small. But the feeling is one of amazement, not of disgust. It is indeed an amazement that I can be here, in the middle of the Peruvian Andes, riding taxis with chickens, and gaining a new perspective in life.

It opens your eyes, really. Some people say that traveling solo can be depressing, and they would not do it. However, I have never felt happier than before, as I ponder the thought that this is another accomplishment I can brag about. I never felt more alive.