Day 8: How To Be Not Pathetic

This is the day in which things start to wrap up. I originally planned to go up again to Machu Picchu, but I decided against it, since I guess I had more than enough time scouring the place the day before.

So, I did something else. My hotel wanted its guests to check out at 9:00 AM, which was kind of early, but with a reason. The thing is, the trains that ferry the tourists from Cuzco arrive early too, so the turnout of people happen earlier than in other locales. In fact, I arrived at around a few minutes past 9:00 AM yesterday myself.

So, I just had breakfast in the hotel, had a shower, and then checked out. I asked that my backpack be left first in the hotel lobby, which they kindly accommodated. The reason was because I wanted to explore the little town I was in while waiting for my train ride back to Ollantaytambo in the afternoon.

So, here I am, in Aguascalientes. This is a very touristy town, in fact, with tourist restaurants lining the railroad tracks, which also doubles as the main road of the town. There are a lot of handicrafts markets and construction. I guess that is because it is the gateway to the most famous archaeological ruins of the continent.

Anyway, everybody passes through here, and so did I. I have something good to say about my hotel, however. The river is right next to it, and the white rapids were lulling me to sleep. It felt very bizarrely wonderful, sleeping like that, as if I am in the middle of nature. Even though I have cable TV in my room. The sound of the water rushing against the rocks was wonderful, something that I have been experiencing since I was in Urubamba.

This is a shot of my hotel. Not so fancy, but the river gushing right in front of it was amazing. 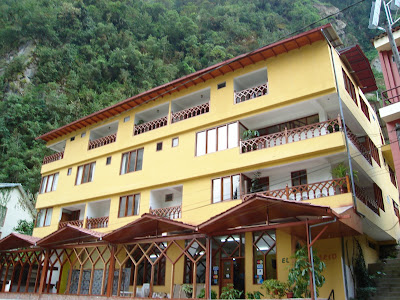 As you can see, the clouds are very low in the morning. 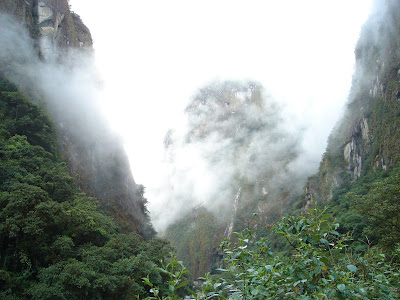 This is the river which lulled me to sleep. 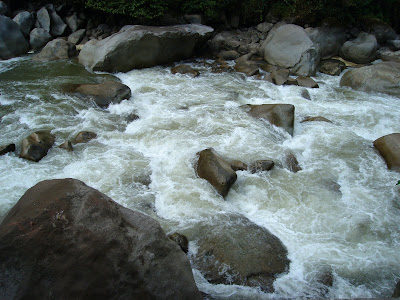 Finally, a picture of a statue of an Inca chief in the middle of the town square. 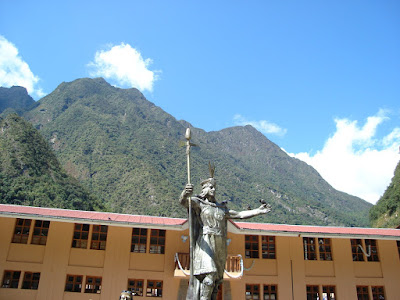 Now, this is the day in which I saw something which made me think that I would not
want to be, when I grow older. It has something to do with the other tourists.

I guess my readers already know that I have planned this trip myself, arranging everything, from flights, to hotels, to the other means of transportation. I like being in control, doing everything, or as much as possible, if not everything, by myself. Now I see these tourists, in tour groups, where everything is done for them.

There was one word that came to my mind: Pathetic.

I know that most of these tourists are advanced in age, and that most of the time, they only want to relax, and since they have the money to have someone else do it for them, then why not? However, I find it really unimaginable, that I would surrender the control of my movements to some agency. In breakfast, I overheard this elderly man asking the operator where they were going for the day. I never would imagine myself in that situation. Perhaps, I would join a full-package tour only if the country is rather unfriendly, or if the country requires tourists to join an official tour group, say, North Korea or Uzbekistan. However, if I can do it myself, then I would.

Then I saw the tour operator handing back their passports. Wow. I guess I am too libertarian to be in that situation.

Then I saw this lady, in the Internet café, who was clueless with regard to the Internet, simply because everything was in Spanish. My goodness, she was using MSN Messenger, the colors are the same, the buttons are the same, the blanks are the same. Only that they are in Spanish. But guess what? She asked the manager to explain what those are, but those are simply the places where one puts the username and password! But she acted like she was so lost, as if her brain instantly became catatonic. Unbelievable. Thay say that people who speak three languages are called trilingual, people who speak two languages are bilingual. However, people who speak only one language are called Americans. I guess I cannot over-emphasize the importance of learning the local language. It makes your experience more enjoyable.

Oh well. What can I do? I cannot apply Archimedes here. There is no linguistic lever and a place to stand and I can move the world.