Day 9: When The Whole City Woke Up

So, I am nearing the end of my trip. I left the Sacred Valley today, checking out of my hotel in Ollantaytambo after eating breakfast. Then, I headed to the main plaza of the town and caught a colectivo, another one of those shared taxis that ferry people from Ollantaytambo to Urubamba.

There were no chickens this time, but plenty of people. Again, I climbed the van to the top of the roof and tied my big backpack on the rack, so that it would not fall whenever the van makes its rapid turns, because, again, the driver has a death wish. Good thing I waited for a new van to pull up before boarding, so that I got to have a good seat.

The rest of the passengers were locals. I was the only guiri on board. The rest were people speaking in Spanish and Quechua. And my oh my, I cannot believe how many people were inside the van. It was like one of those circus shows, where the clowns try to fit as much people as they can in a small Beetle.

Well, for this van, regardless if the seats were already taken, the driver would still stop and pick up passengers if the people on the road raise their hand and ask the driver to stop. And they boarded in and squeezed themselves.

So, after that interesting ride to Urubamba, I then changed transportation in the same terminal. I then boarded a bus to Cuzco. I boarded the bus to Cuzco that passes by Chinchero, although I could have boarded the bus that passes by Pisac instead. The thing that made the choice was that there was no passengers yet on the Chinchero bus, so I can select a seat that has sufficient space for my backpack without putting it on the cargo hold.

So, I reached Cuzco after about two and a half hours from my initial departure in Ollantaytambo. I then took a taxi to my hotel. This is my first hotel since coming in to the country, and once again, I met the hospitable people. I then put my things down, and it was almost time for lunch, so I headed out.

It happened to be a Sunday, and there seems to be an event here in Cuzco. It seems that the whole population of the city was in the city plaza. There were parades, people dancing, people wearing masks, and people playing music. I took some photos, and I even went to a restaurant that had a balcony table, to which I occupìed, so that I could watch the whole scene unfolding.

Every type of costume were there, from people simply wearing their Sunday best, to beautiful intricate Andean skirts, to folk masks, to people wearing the Cuzco flag. It was quite an experience.

Here is a photo of the women with the colorful Andean skirts. 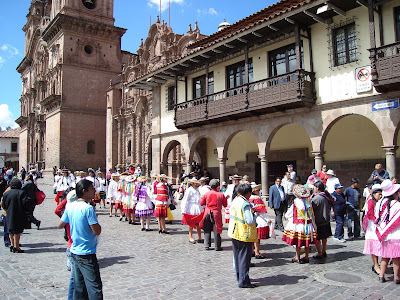 Some more people parading. Notice the stop sign, with the word PARE on it. In Tagalog, it means "dude". But in Spanish, it means to stop. 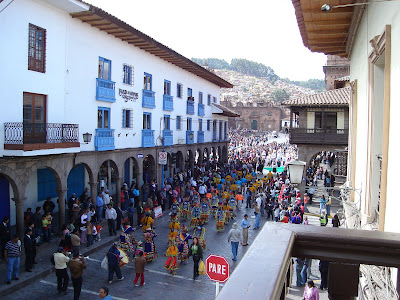 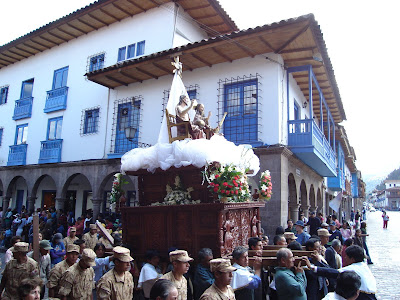 Here are the red dancing girls, with the musicians following them from behind. 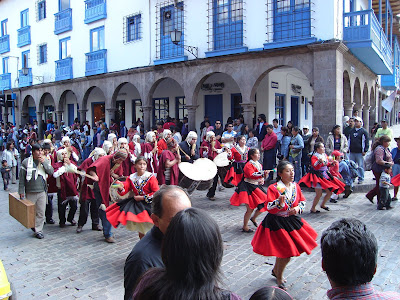 And then here are the grotesque group, with the whips in tow. Notice the Peruvian flag flying, together with the Cuzco flag. It is NOT the gay flag, for crying out loud. 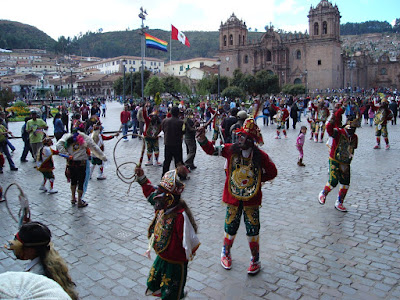 Finally, here are the dancing children with the musicians. The girl on the foreground looks like she is possessed. 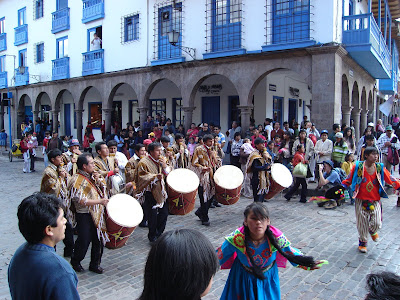 If you look at the next picture I took, you would really think that she is possessed. 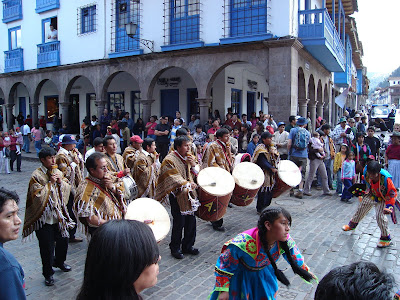 After lunch, I went walking around the plaza, and hunted for souvenirs. I found these small artisan shops near the main plaza, and I got some souvenirs for the family.

I wasted time by frolicking around the city, taking photos of the performers. When dinnertime came, I went into this quiet Indian place, which has the best Indian food in Cuzco. I guess I had enough of Peruvian fare for the moment, and I wanted a change. It turned out to be good, I was talking to the owner as I was eating, and she gave me pointers as to where to go to India should I decide to visit.

And since it was my last night in Cuzco, I strolled around after dark, and took some night shots of the plaza. Like this one. 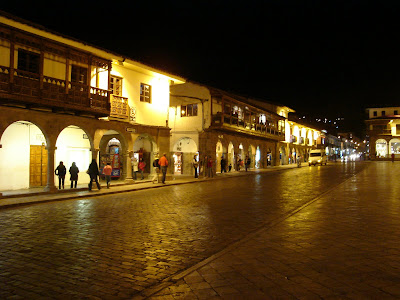 So there, I guess Sunday really brings the best in Cuzco. Most of the museums are closed, but the main attractions when it is a Sunday are the people themselves.