So, I attended the psycholinguistics lab this morning. And so my brain was working all the way until around three in the afternoon, because after the lab meeting, I went with the other members and I was sort of initiated into the goings on of the lab. I learned how to run experiments, and use the machines. I learned how to run subjects and deal with them.

In short, tons of new information entered my cerebral cortex, and I am having a bit of an information overload. Not that I mind, it's just this feeling that you have when you know you know the information you are supposed to know, but is still not confident that you can recall what they are. I guess I just need practice.

Anyway, I am happy, since I get to learn these new skills in manipulating machinery in order to test my hypotheses in my own studies. It is sexy, in a rather different sense of the word.

So there, tomorrow, I have another appointment with another one of the people in the lab, and I will be doing a test run of another experiment they have, because presumably, later on, I will be running these experiments myself on my own.

I also printed a bunch of papers that I have to read before I head to Europe. I still have about two weeks ahead. I am not worried, with my schedule, I would easily forget that this is summer and that I have plenty of things to do.

One important thing that I have to do though, is to go through the tutorial of the review board and prove to them that I know the ethics behind the experimentation environment in the academe. I have done this before, but I believe that they have revised the scheme, so I have to do it again. I will be doing it tomorrow, and people say that it takes four hours to do it. I guess I will have to learn about the botched scientific experiments of the 1950s again, and why those are not permitted nowadays. Unless I do that tutorial, then I cannot run experiments in the lab, so I better do it quickly. 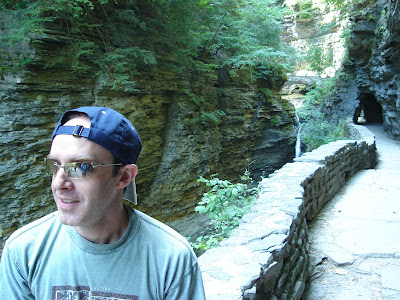 (A Gorge, a Pathway, and an Argentinian, from my Watkins Glen Series)