So, I am back from New York City. It was an ok trip, with the things that I needed to do being accomplished. So, now, I am back here in Buffalo.

I spent two days there. When I arrived, I immediately went to the Danish Consulate in 2nd Avenue, and my visa application was approved on the spot. Now, I am just waiting for them to mail back my passport, with the visa sticker affixed to it. So I can say that I now have the legal capacity to fly across the Atlantic once again!

After the consulate visit, I visited the Temple Emanu-El, the largest Jewish religious meeting place in the world. I took some photos, but I couldn't stay long. I still had my luggage which I was hauling all over Manhattan, so that was an inconvenience.

The next day, I went out and visited the Museum of Modern Art, near the Rockefeller Center. I haven't had the chance to visit this museum when I was in the city last year, so I visited it this time. And surprise surprise, I got in free. Apparently, all State University of New York students get free entrance, regardless of which college or university you attend. As long as you are a student of any SUNY school, then you get in free.

After that, I met with my sister, and we bought some supplies for a picnic in Central Park. Well, what I meant by picnic was just getting food from the hot bar and taking it out to eat in Central Park. We had planned to walk around Central Park, since neither of us has done that before. So we did that, and we saw plenty of greenery.

After that, we headed over to the Upper West Side, almost near the border to Morningside Heights. We went inside a bar and had tapas/dinner, while enjoying happy hour. Then, we headed to the Greenwich Village, because we had tickets for a modern dance performance. It was a rather interesting event.

So, after that, we headed back home, and the next day, I headed to the bus station to trek back to Upstate New York. 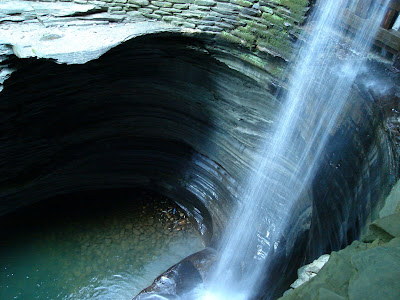 (Gravity and Water, from my Watkins Glen Series)