Nothing exciting is scheduled to happen to me for the next three weeks. I will just be here in Buffalo, enduring the heat (yes, I hate the heat, and even though I come from a tropical country, my body seems to be programmed otherwise). I have a number of papers and articles to read, in preparation of the summer workshop that I will be attending. I also have a number of grant applications that I need to read before attending the grant review panel meeting next week. But otherwise, there isn't anything spectacular as what I had last month, when I frolicked in South America and took more than 1,600 photographs.

I guess it is true what they say, that what goes up also goes down. If there is a peak, there is a valley. Well, I look at it this way, if I am heading for a valley, the good thing is that there is a peak after that valley.

Now I do hope that this is not similar to the US economy.

Anyway, I have a rather geeky yet interesting find. I have this website where I can record my flights that I have taken, and so a few months before, I took the initiative to record every flight that I have taken, from the moment I took the very first air trip. If I remember correctly, my first instance of flying is from Manila to Los Angeles, on my way to Denver. This was when I was just 3 years old. So, I took all those flights, entered them in the database, and I had some interesting descriptive statistics.

Apparently, it was the Manila-Los Angeles flight that was the longest flight that I have taken, spanning 11,753 kilometers. The shortest flight on the other hand was 308 kilometers, when I flew from Cleveland to Buffalo, three years ago. By the end of July (I already entered the flight details of the eight scheduled flights that I am taking this July), I would have flown a total of 191,954 kilometers, which is enough to circumnavigate the earth at least four times. It is 0.499 times the distance from the earth to the moon.

Wow. This is becoming a rather geeky post. I better stop here. And hopefully something more substantial and worth blogging comes up in the next few days. 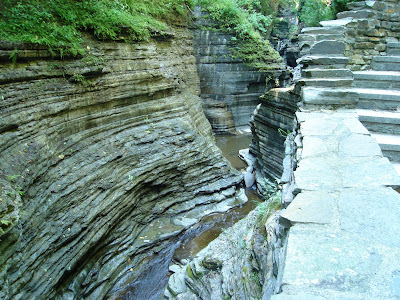 (Ridges and Steps, from my Watkins Glen Series)