So, I arrived in Copenhagen this morning. I woke up at 6:00 AM and took my last shower in Odense. I then packed my things, and together with my former adviser who turned out to be a good friend of mine, and another student who happens to be from Russia, we walked to the bus station to board the bus that would take us to Odense train station.

Due to the fact that it is a Sunday, the buses do not run as frequent as the weekdays. So there is only one bus every hour, since it was still an early part of the day. So the three of us wasted the time away by comparing each other's passports, laughing at the weird photos we had.

Anyway, the bus finally came, and we got to the train station after about fifteen minutes. We had breakfast in the station's bakery. And then we proceeded to the platform, and boarded the train. We took some funny photos of each other, and after an hour, we arrived in Copenhagen Central station. Vera, the Russian student, didn't join us since her flight was earlier than my former adviser's. So Vera proceeded to the airport, since the same train would head there.

My adviser and I on the other hand got off, and we headed to my hotel. It was still early, about 10:00 AM, and I wasn't able to check in yet. So we instead stored our luggage and then strolled around the city.

We went to the Ny Carlsberg Glyptotek. This is a huge museum full of ancient antiquities, mummies, statues, and so on. And the good thing was, it is free on Sunday.

So we spent two hours inside the museum, taking photos of Horus, Anubis, Nero, Hadrian, and other people. My adviser enjoyed it a lot. I have taken a lot of photos, but you all will see it in good time. In the meantime, let me give you a preview. 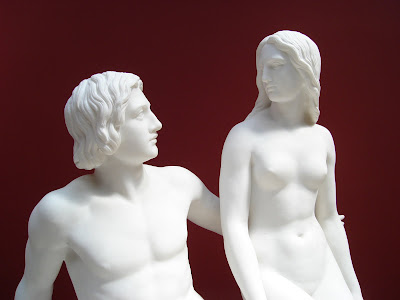 This is one such sculpture inside the museum. I suppose this is one of the best museums I have been to; the lay-out is very good for photographs, due to the contrasting colors of the walls against the exhibits.

After spending two hours in the museum, it was time for my adviser to go to the airport and catch her flight to Stuttgart. So we went back to my hotel, and she took her stuff from the luggage room. I then walked with her to the main train station and bid our goodbyes. I haven't seen her in three years, and so it was good that we saw each other again.

I then had a quick lunch at the train station, and then took a stroll. I went to Vor Frue Kirke, the national cathedral of Denmark. This was the venue of Denmark's largest wedding, that of Crown Prince Frederick and Mary Donaldson. This is a rather unusual church, not like the ones I have seen in Cuzco, Prague, or Rome. This was of a rather different design, rather subdued, and just simply different. It doesn't have an intricate design, but it was full of angles. Look at this photo of the interior. 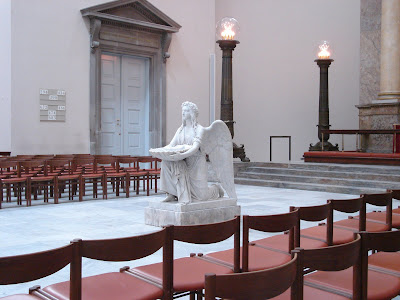 Anyway, after taking photos of the inside of the church, I noticed that there was music emanating from the windows. I then went out, and realized that there was a music performance of the Copenhagen Jazz Festival. I later learned that today was the last day, and I was fortunate to watch one performance. This festival is an event that is held for ten days, in different locations. This one location featured Thommy Andersson and his band. I never was a jazz fan, but this one was just different. It was superb and hypnotizing. I stayed for about thirty minutes and then I went back to my hotel, and finally I was able to check in.

This was one photo of the event. 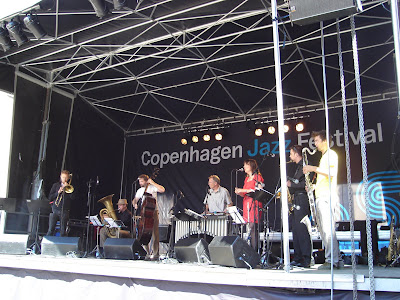 I suppose I was too tired after all the late-night statistical crunching that I did the past week, so I decided to take a nap for a couple of hours. Then, I woke up at around 5:00 PM, and got out of my hotel again. The nice thing about Copenhagen is that everything is walkable from the city center. I had a quick supper, and then I proceeded to a park to take pictures again.

I headed to Ørstedsparken, a park located north of the main train station. This is a small park with a lake in the middle, and it was a rather good place to take pictures. Here is one I took. 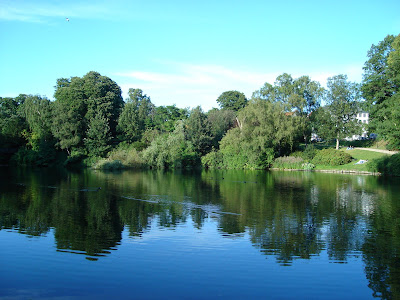 After that, I proceeded back to the hotel, and now I am writing this entry.

I noticed that Copenhagen is a sexy city. People are happy, and they look content. People walk around smiling, and they do not look like they have plenty of worries in their head. Tall blonde women walk the sidewalks strutting their stuff, while talking on their mobile phones. Guys stroll the streets walking confidently, with a definite sense of style. I have to say that I do see the reason why international surveys rank the Danes as the happiest people on the planet.

However, it also did not take much for me to realize that there is more to that story. That is just the surface, and one can see what is underneath as well. There are some homeless and drunk people sitting on benches. The Danes may feel safe enough not to lock their bicycles when they leave them on the street (and this is more true in the countryside, like Odense), but there are signs here and there reminding people to be vigilant against pickpockets.

And one should not forget the foreign population of Copenhagen as well. Taxi drivers are for the most part, immigrants, coming from North Africa and the Middle East. And due to the fact that it is a Sunday, I noticed one foreign population so much I could spot them even from a few meters away out in the open: Filipinos.

I was surprised at the number of Filipinos inhabiting Denmark. And the weird fact is, most of them look alike. As if they are one big family, and they are all siblings. What would they be doing here? Domestic helpers, baby-sitters, maids, among other things. I was surprised at the fact that they all looked small, as if they were a good one foot smaller than me, who happen to be five foot eight. They dress alike, they act alike, and they talk alike. One can be sure that they come from the provinces back in the Philippines, and they are here because they cannot find a job in the Philippines, and the lack of education just prevents them from taking anything but menial jobs.

And since it is a Sunday, they have the day off. I see them shouting in the streets, smiling to each other. In the back of my head, I wonder what kind of impression these people give the Danes with regard to the Filipino population. These are the people who take care of their babies, who wash their dishes, who clean their toilets and baths. The Filipino is much more than that, but I am afraid that it is the only impression that the Danes get from the current situation.

I suppose it was an opportunity for me to be grateful. To be grateful that I wasn't born into a family of eight or ten children, in which the parents couldn't support the family, in which the children would not go to school, in which the children would simply head overseas and find jobs serving other citizens of other countries, taking care of their babies and washing their shit, only to send back money to the younger children in the hometown. It is indeed a large divide, between me and my other compatriots. I suppose it made me grateful that I had the opportunity to munch on Danish blue cheese and beer the other day, while for these people, they would be happy if they simply gathered together in the nearest McDonald's.

I do not want to sound elitist, and I am not being one. I simply am noting the divide between the middle class and the working class. Although I would not want to trade places with them, I do admire them. I recognize that without them, societies would have a hard time. The reason why Copenhagen is sexy is because it has this working class population supporting it from beneath.