On hindsight, I sometimes am amazed at my planning abilities, that I sometimes wonder why is it that my brain is wired this way. Well, today was such an example.

But, let me backtrack a little bit to a few days earlier.

I am scheduled to depart for Europe on Thursday, July 3. This happens to be tomorrow. Before that, there were quite a few things to do. First, there was the paper revision. I initially planned it to bring the job with me, but I figured that it would be easy for me to just finish revising the whole thing while I am still here, and so that would be one less thing to carry and worry about. I actually turned it in Monday, and e-mailed my adviser that it is waiting for him in his mailbox. Now, Tuesday morning, I get his e-mail, asking me whether I am really sure that I have already fixed the things that I was supposed to fix. He said that he knew that I was fast, but he said that it would be better for the two of us if this was the final draft, so that there wouldn’t be a fourth draft.

I was quite confident that the thing sitting in his mailbox was a good revision, but, because he e-mailed me, I picked it up and read it once more. Of course, there were a few things that I thought would be better if I fixed it. So I deleted a paragraph here, reworded a few here, and printed it again. Then I replaced it in his mailbox. This was Tuesday.

There was also the issue of the haircut. My Iranian hairstylist was on vacation; I called her shop last week to see if she was around, and apparently, she was not going to be back until next week. So I said that I would just walk in on Tuesday. However, when I did walk in around half past twelve, the shop was rather full. Technically, it was not, but there was only one hairstylist there, and she had appointments all through the day. So she suggested that I make an appointment the following day (Wednesday). So I did that, and picked 4:00 PM as a time. So today was Wednesday, and indeed, I went there at four, and had my hair cut.

I was also supposed to help a friend move. That was earlier today. That’s why I scheduled my haircut later in the day because I knew that by that time, I would have taken a shower already, after coming back from the move. So at 9:00 AM, my friend swung by and picked me up, and then we headed to his old apartment. The good thing with this move is that his new apartment is just across the street. So me, a German girl who happens to be a common friend of ours, and this American guy are carrying mattresses, boxsprings, desks, chairs, and sofas across the street. It was quite an adventure and a workout.

We finished at around noon, and because the German girl and me helped the guy move, we got a free lunch. My American friend bought us lunch in the Lake Effect Diner, which is a few blocks away from where the German girl and I live (we live in the same neighborhood). After that, I headed home and took a shower, and then headed to my hairstylist.

Now what? Oh, yeah, right now, I am waiting for my laundry to dry. I had this last load of dirty clothes, and I didn’t feel like leaving it here for a while as is, while I am gone. Yes, I have scheduled this laundry to happen. Besides, there were a few things that I wanted to bring with me and were dirty. So, yes, I am in the middle of packing, and as soon as this laundry is done, I will iron some of the ones that are in need of ironing, and fold the rest, and pack the ones that I needed to bring with me.

So far, things are on schedule. It feels like a grand orchestra, you know, things should happen here, now this is next, and then this one, and then that one. I really hate spontaneity, I rather have a schedule. If not I probably would go crazy. 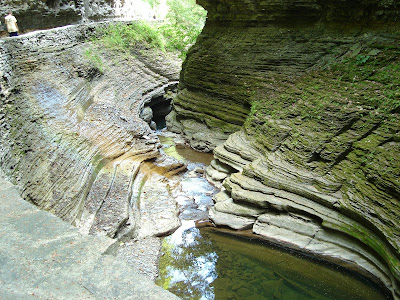 (Rocks, from my Watkins Glen Series)