Something I read recently reinforced to me the idea that politics is crazy.

It has something to do with Russia recognizing Abkhazia and South Ossetia, and the reaction of the international community. Russia recently recognized these two entities as independent from Georgia, and that created a wave of non-recognition from the United States and the West.

If one thinks about Kosovo from a few months ago, it just seems that politics is so perverted, since really, it does not make any sense.

A few months ago, Kosovo declared independence, and Russia was one of the countries who opted not to recognize it. Russia's reason was that it would create a "terrible precedent" that "breaks up the entire system of international relations". But guess what? When the same thing happened to Abkhazia and South Ossetia, Russia spear-headed the way of recognizing the two breakaway provinces of Georgia. So much for caring for terrible precedents I suppose.

So, with regard to Kosovo, Abkhazia, and South Ossetia, let them be. If they still find their heads up and not sink, then that would be good. Otherwise, if they need support just to say that they are independent, then it would be wiser to attach themselves to a larger entity and stop pretending that they can do it on their own. 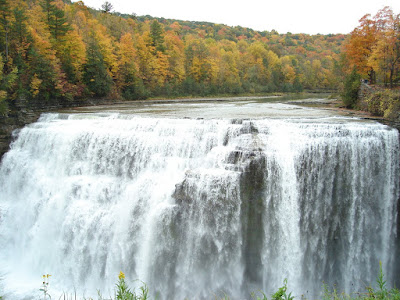 (Gravity at Work, from my Letchworth Park Series)