Why I Am Not a Physician

I have to admit, I got hooked to House M.D. just recently. While in Budapest, I copied my parents' AVI files of the show into my computer, from the very start of Season 1, and have been watching it episode by episode. And one thing I am sure of, is that I like the show.

I don't know, maybe it is the empirical way the main character deals with people. Maybe the fact that Gregory House is so detached from his patients, and is so pessimistic, thinking that patients lie all the time, is the reason why I like the show. Gregory House can be a very good scientist. I admire his objective character. I suppose if that character would get a personality test, he would be an INTJ as well.

Obviously human interpersonal relationships are his Achilles' heel. He has a bad working relationship with his fellows, and his boss doesn't like him either. He is lonely and miserable.

Is that the price to pay for objectivity? That makes me realize that physicians have a tough job of balancing the human touch and empiricism. If you have a patient that is dying, would you sweeten your words and give him the news in a more "humane" way? I wonder what type of sensitivity training physicians go in order to be a "good" doctor.

It makes me realize why I did not pursue that career path. Obviously, I didn't like biology back in high school (if I were to choose a "hard science" as a major, I would pick physics or geology), so going into pre-med was out of the question, but even if I did, I suppose I would realize it sooner or later that I would not fit the bill. I'd probably hit a lot of complaints about sensitivity issues as well, or I would just be frustrated for other reasons.

I suppose another reason why I picked my current career path is because nobody dies in Linguistics. If one studies Political Science, well, national decrees and international relations has caused the deaths of multitudes, just look at what is happening in South Ossetia at the moment. If one studies Medicine, then sooner or later, someone might die because one did not administer the correct treatment, or even give a correct diagnosis. At least a person's life or death is not at stake whenever I run experiments on reading time. 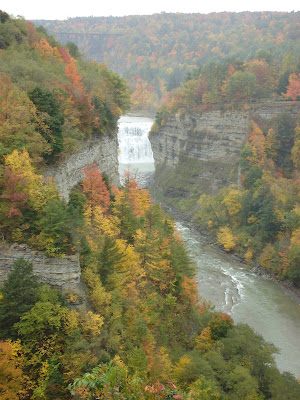 (Middle Falls from a Distance, from my Letchworth Park Series)