Nice to Know You

Have you ever watched The Runaway Bride with Julia Roberts? You know, the movie where she gets engaged multiple times, and yet she doesn't get married because she somehow has a fear of weddings? Well, her character somehow reminded me of myself, not that I am getting married anytime soon.

I remember her character making plenty of different eggs just to know what type of eggs she wants.

I suppose certain things that are salient currently make me feel that I am doing the same thing. The thing is, sometimes I don't know who I am, and what I want. I suppose one also needs to know oneself, and there are things about myself that I do not know.

Perhaps the reason why I ended up in this lot is because I simply followed what everybody else was doing. It reminds me of the first album by the Cranberries. Released back in 1993, it was entitled Everybody Else Is Doing It, So Why Can't We? It produced the successful songs Linger and Dreams.

My bubble burst. I suppose I had too much cognitive dissonance in my system that there came a point that I felt that my head was overheating and about to explode. There was one time in which sometime late in the evening, I was leaving my office and heading home, I started walking, and lost my bearings somehow. I later realized that I was aimlessly walking around campus for almost half an hour.

Anyway, I suppose I need to discover what I really am, and which things I am comfortable with. Because otherwise, I would just feel robotic, being swept around by social forces. I suppose I should take up Pascal with his challenge, instead of simply accepting his wager. 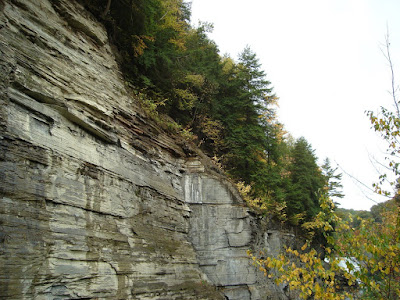 (Rocks on the Side, from my Letchworth Park Series)