Funny, but I saw three different people today, people who I haven't seen in quite a while, and in all three people, I saw a change in them.

Person Number 1: I suppose the last time I saw this person was back in April. We were chatting back then, about a certain academic possibility for me, and now he was in town, and so he decided to check on me again. Not much of a change, his clothing style was still the same, preferring checkered shirts and jeans, but he shows up with a beard this time. I saw a bearded look of his a few years ago, so I have an idea how he looks like with one, but I suppose it still doesn't sink well in the head, especially if one is used to seeing that person clean-shaven.

Person Number 2: The last time I saw this person was again, last semester. The semester before that (Fall 2007) I saw this person at least 3 times per week. She shows up in my office again this time around, with the intent of saying hello. She asks about my summer, which I narrated, and we exchanged stories about our summer travels. She asked me how Peru and Denmark was like, and she apparently went to Guatemala for a vacation as well. And she enjoyed it. The biggest change I saw was the tan. She wasn't tanned like that before.

Person Number 3: I saw this person last semester as well, and I thought this person already graduated. But apparently this person is still here. We talked about things, and this person also traveled in the summer, to Germany. I thought the destination was the Ukraine, because we talked about that before, but it looks like Ukraine is a little complicated, and so that wasn't the destination this summer. The biggest change I saw in this person was the weight loss. The person's face just seemed flattened at the sides. I suppose the Ukraine had something to do with that.

Anyway, to change the topic, I have received some very good news recently. It seems that the professor that I am supposed to work with as a research assistant finally got all of his papers. So I suppose once he gets here, I will cease to be a TA in the class that I am a TA, and will then work with this professor and do research together. Yehey!

Speaking of research, I should get back to my adviser, even though he is on sabbatical right now. The professor who runs the lab that I am working in already asked me if I have plans of running subjects in the lab. I wanted to say yes, but as of now, I still have no concrete method that I am thinking of using in there. I still am exploring what methods are useful if I would want to extend my research in temporal interpretation. The lab has equipment that would be able to run reaction time, reading time, and eye-tracking experiments. Eye-tracking sounds good, but I need to reformulate my hypothesis and see whether things are actually doable in this method. 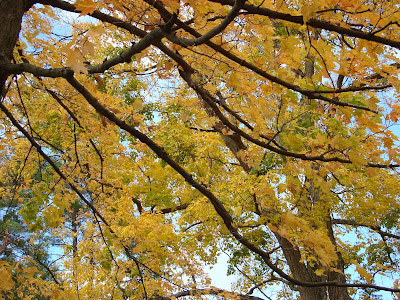 (Leaves and Branches, from my Letchworth Park Series)