This afternoon, there was this event that I attended, hosted by the Dean of the College of Arts and Sciences. Like I mentioned earlier, it was the Reception honoring the different fellows of the college, and that included me.

I suppose it gave me reason to dress up for the day, and today somehow I started wearing long-sleeved shirts to campus. Until now, I usually wear short-sleeved shirts, and a jacket or sweater. It has been my attire for the past three years, and I figured I would start wearing something different.

For today, I just figured I grab my black long-sleeved shirt, and pair it with black pants. You know, the one that would either look like I am heading to a funeral or that I am some gigolo heading to a hotel.

I have this German friend, and he always makes remarks about my outfit. Whenever I wear something, he points it out. The other day, I was wearing an orange shirt, and he noticed it. This time he noticed my black outfit, and he asked me if I was heading to a funeral.

Anyway, the reception was ok. The food was good, and there was wine as well. As usual, my alcohol tolerance wasn't so great, and the single glass of white wine immediately sent its effects to my cerebral cortex. My friends immediately noticed that I turned red, so obviously, I didn't follow it up. I don't want to be an embarrassment to the department, after all, the department chair was there, and she made it a point to introduce to the dean all of the students from our department, so I got to meet the dean and shake his hand.

Anyway, since we were a big crowd, we were talking and laughing and cracking jokes. One of us comes from South Korea, and she is a little cute and funny. I suppose she cannot distinguish when is reality and when is a joke. Anyway, I suppose some people are having fun making her believe crazy things. It doesn't sound too sneaky, it all has something to do with culture shock. Like telling her things that Americans allegedly do, and she immediately believes it. Of course, afterward we say that we were only joking, and she gets a sigh of relief.

Anyway, I was walking back to my building with her, and then she told me that she likes my smell, and according to her, I smell like baby powder. Uh-oh, I didn't put baby powder. I asked her whether it was a bad or good baby powder, and she said that she likes it. Maybe she was just making a joke on me, but I will give her the benefit of the doubt.

Although, I still do not get why Yves Saint Laurent's M7 smells like baby powder. It is one intense cologne though, that I will say. 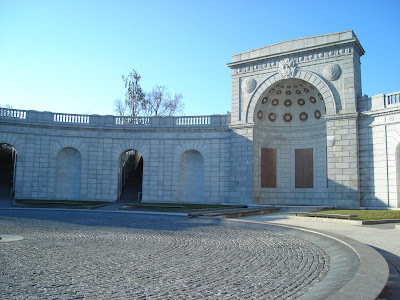 (Cobblestones, from my Arlington Cemetery Series)