So, I flipped my calendar, given that it is the beginning of a new month. I have this calendar of ancient Japanese woodblock prints, and this month's picture is one by Katsushika Hokusai, entitled Ono Waterfall, the Kiso Highway. It is very colorful.

I have watched the latest serving of my favorite show, The Amazing Race. I suppose even though it is on its thirteenth season, I am still not sick of it. I know that they go to places that the race has been on previously (like the fact that they are again going to India for this season, even though they have been to the country a gazillion times now), but I suppose there are just so many things one can do in some places, that it doesn't seem tiring.

This episode that I watched was the first episode for this season. It had the teams go to Salvador, Brazil. And I find it annoying that they always show these ignorant Americans who think that Spanish is spoken in Brazil. Maybe that is just the catch of the show, showing Americans who have low travel IQ.

I am having fun listening to concertos nowadays. Not live, but still, I like it. I have this online resource that I can go to, and stream music to my computer and listen to them. Right now, I am listening to Astor Piazzolla's Bandoneon Concerto. I suppose listening to the classical music radio station while driving 9 hours to Chicago did the trick; I listened to Carl Reinecke's Harp Concerto somewhere in Indiana.

By the way, this picture is the last of my Letchworth Park series. A new picture series would be launched on my next post. Watch out for it! 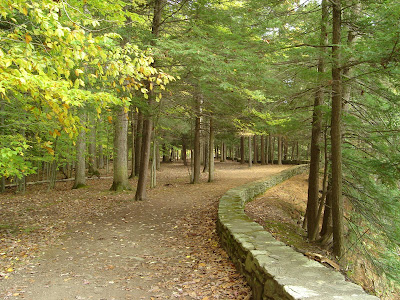